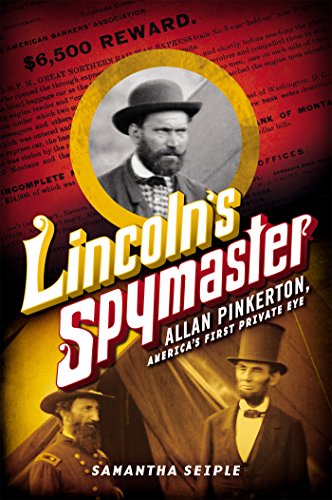 So, I realized the only way I really knew the Pinkerton name was through visuals of the Pinkerton ‘goons’ busting up labor riots with force and violence in the late 1880s and early 1900s. That’s part of the Pinkerton story, of course, but the origin of Allan Pinkerton as the first “spymaster” for the federal government during the Civil War is fascinating.

Samantha Seiple explores Allan Pinkerton and the origins of his detective company in Lincoln’s Spymaster: Allan Pinkerton, America’s First Private Eye, using plenty of rich primary sources to bring to light how undercover operations helped Lincoln’s efforts in the Civil War, not to mention Pinkerton’s thwarting of at least one or two assassination attempts on Lincoln’s life before John Wilkes Booth did the awful deed after Pinkerton left the government.

Seiple brings us right into the cloak and dagger operations, as well as showing how Pinkerton built up a business of spies that eventually led to the formation of the Secret Service and then the FBI. The use of primary images really helps show the reader the time and place of the stories woven here.

Plenty of rough characters come into play, too, from Rebel Rose Greenhow, during the Civil War, to Jesse James and his gang of bank robbers in the era after the war. Pinkerton is shown here as smart, tough, stubborn and dedicated to his job, at all costs. His own sons took over the company and helped steward it into a large investigative firm that is still around even today.

I suspect this non-fiction book will appeal to some of my students, and the storytelling is solid and informed. Pinkerton’s techniques of “tailing a suspect,” going “undercover,” and placing informants into enemy terrain are the stuff of spy stories, and most of these were first used in real life by Pinkerton and his detectives.