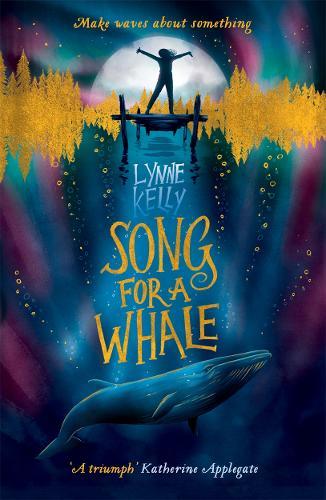 Wow. I was really blown away by Song for A Whale by Lynn Kelly. I bought this book on a whim, because I liked the gorgeous cover art and I am interested in any books with “songs” and music. I’m glad it caught my attention and that I read it. It’s lovely.

Song for A Whale is a beautifully-told story that centers on Iris, a 12 year old deaf girl struggling to make her way in a world of the hearing, and becoming more and more frustrated by the walls between those worlds. At school and at home. With a knack for fixing anything electrical — she can disassemble things faster than you can turn on the power and spends her hours at the junkyard looking for parts — Iris loves old radios, in particular, as she finds connections between the vibrations of sound – the way the waves of frequency move through the wires, which she senses through touch — and her own soundless world.

When Iris learns about a whale whom scientists reason to be either lost or not part of any pod due to its off-beat song (and maybe its designation as a mixed breed of whale), Iris is hooked on helping this whale know it is cared about. She decides first to write a song for Blue 55 (as the whale is known) in the frequency of his own song. Then she becomes determined to let Blue 55 hear the song she has written for him, even though it means heading out on an unexpected journey to Alaska with her mourning grandmother, without knowledge of Iris’ parents.

There’s so much to love here — from Iris as a complicated adolescent character overcoming odds through perseverance, to her passion for ocean science and mechanical engineering, to the need to connect to nature’s oddballs like Blue 55, to how sound and music might emerge as connecting points between people and the natural world.

This book is perfect for the middle school classroom, and the story gives thoughtful and emotional insights into the difficulty of fitting in, and of deaf students in a spoken world. You’ll root for Iris, and for Blue 55, and for the power of making a difference in the world. You may even sing their song.

Peace (in seas and beyond),
Kevin

PS — the story of Blue 55 is based on a real whale, sometimes called “the loneliest whale in the world” because it, too, had no pod. Lynn Kelly has a whole page of resources about whales and whale songs.

I liked this visualization, which comes from converting whale songs into manuscript music: