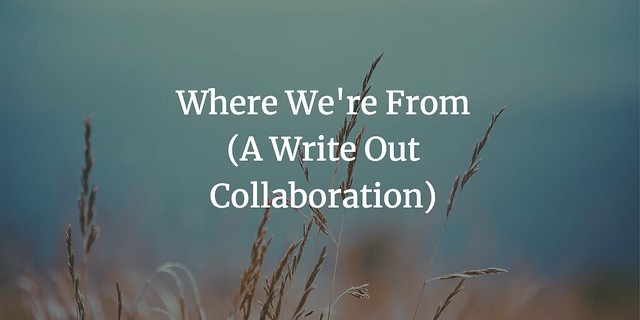 After a week or so of asking (cajoling, sometimes) folks to record lines and stanzas from the collaborative Where We’re From poem (with lines submitted by more than 100 people during the first part of the Write Out project), the last track was delivered, put into place, and the collaboration … is complete.

There were 25 people who submitted voices (well, technically more, since Kim D. had her entire class of young students reading) and recording tracks to this collaborative poem, which runs nearly 13 minutes long. That’s  a bit to listen to, but the effect is what we had hoped for — a quilted collage of many voices reading a poem written by many people, about place and home and family and more.

When we talk about connected learning ideas and collaboration, we hope that this kind of project is something that can inspire us to create together, to make together, to publish together. Sure, there are problems — some of the audio files sound different because of the myriad of apps and microphones. We did our best to level things out, but there’s plenty of rough spots.

That gives the audio poem charm, though. People are different, and our voices are different, and the audio collage reflects that in meaningful ways. If you participated in any aspect of this — from writing lines, which were dispersed and gathered in themes of stanzas and sections to recording assigned parts — thank you.

For Write Out, we’re inviting you to add a haiku or any other small poem to a collaborative slideshow now underway. It’s simple — just grab a slide from the Google Slides, write a small poem, and add an image to go with your poems. The more, the merrier.

Head to the project to add your poem

When we asked if people might contribute to a poem based on George Ella Lyon’s Where I’m From and inspired by Kwame Alexander’s crowd-sourced version for National Public Radio, we didn’t know if anyone would answer the call. Well, they sure did. We had more than 100 contributors to a collective, collaborative poem that spans more than 8 pages of writing.

We are now in the process of getting more than 30 volunteers to read stanzas from the poem, which we intend/hope to weave together to create an audio mosaic of voice for the poem itself.

Here is the text of the poem:

Peace (is where we’re from),
Kevin 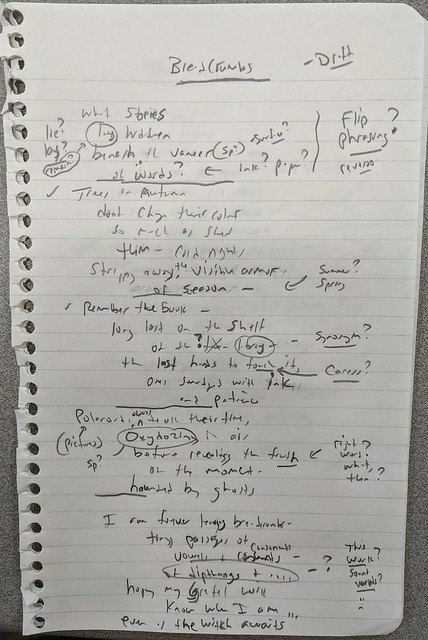 I was writing and rewriting this poem during some quiet writing time in the classroom the other day. Not sure the framing of the poem works, but the mess of the page is how I often write (although when I write with keyboard and screen, all that notation and revision becomes rather invisible). 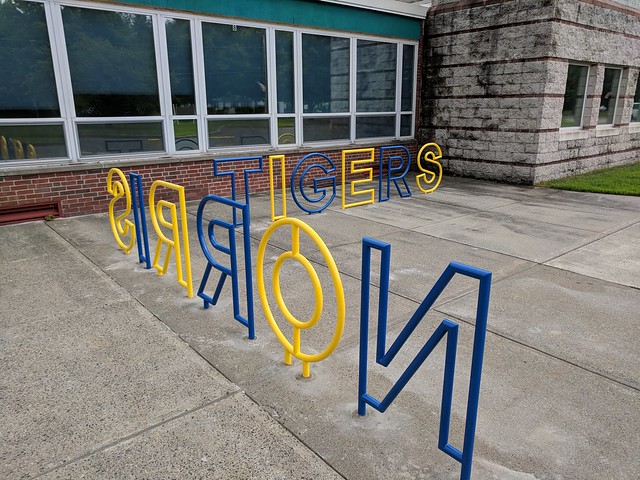 Yesterday, during an extended freewriting time in my four classes of sixth graders, I wrote these small poems, trying to capture the energy and essence of each class period.

Murmurs in the room
captured voices – planning —
talking slowly — each
demanding attention — sharing
thoughts — go wander in among them;
insights fueling discovery –
they teach each other
ways into the world

Almost like:
marbles on a wooden floor
a hornet’s nest, disturbed
glitter in a spring wind
confetti from a skyscraper
voices at a riot
eraser marks on paper

This machine
writes stories —a 20 headed monster
of ideas

We walk in
on forty feet, pencils
gripped against the void

We voice dissent, but not discontent,
sowing chaos — long thin threads
pulled against the quilt of conflict

Only gathered up together like this
do the strands become woven
into something newer, stronger, better
than before

Our stories bound
shared, and beautiful

What if
we were all just characters
in a comic strip? one asks
and we wonder — what if
everything we said was in bubbles
above our heads? another pondered —
and we wondered — and what if
we could reach our hands
beyond the wall itself to grab hold
of our future self? another added

and at that, the room went quiet,
an empty frame of thought

I am dipping into some of the assignments that my friend, Ian, is doing in a university course called Revolutionary Poets Society, as he shares things via Twitter and his website, inviting others to join in. The second prompt calls for a poem of home in an assignment entitled Where I Begin. This is mine.

where we crouched in the corner
of the abandoned swimming pool, dark water
thick with ferment, time and algae

where we bog-jumped in winter,
cracking surface ice in shoes too thin
for warmth, the bonfires always raging

where rain meant shelter, beneath
the eaves of leaves, an excuse to dive
even ever deeper into the woods

where we laughed, went quiet,
cried some, wondered where we’d be,
and if we’d all be there, at all

where we passed the pipes of stories
along in quiet, hidden passions, beneath
the guise of restless childhood

where we lost some, the shared grief
its own river beneath us, our empty
shouting at the skies at night

where just beyond the distance,
if we ever bothered to listen,
we might still hear the voices

of parents calling us
home

I really enjoyed reading through Lost in Translation by Ella Frances Sanders, in which she explores through text and art many words from across different cultures that don’t translate into other cultures. These are words that touch on tangled emotions, or focused insights, or specific cultural reference points. It’s all a beautiful reminder of how language is often elusive.

A few words really spoke to me, so I started to write some small poems inspired by them.

I hope, long before
I, you.
Long before
days slip
to nights,
long before
lost comes
into view
inspired by the Arabic word — Ya ‘Aburnee

will your hand hold
when the rain falls
this Monday morning,
with the whole world asleep,
but you?
— inspired by the Arabic word — Gurfa

When she asks what you’re thinking …
when the words break your gaze …
when you find yourself sitting where you didn’t know …
when the trail of poems runs suddenly cold …
when the soft vacant hue of the distance disappears …
when … when … when … whe …. wh … w ….
inspired by the Japanese word — Boketto 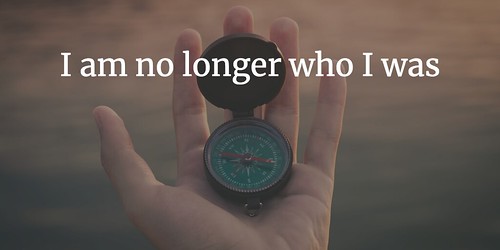 When someone invites me in, I often jump. So it is with Ian, who is running a university course called Revolutionary Poets Society, and the name caught my attention when he began sharing it out via Twitter. I’m going to poke around, from out here in the open (Ian will have students in his classroom, I believe).

His first post is a call to create six word memoirs, which I have done more than a few times but always enjoy it (and my sixth graders are working on their own right now as part of a getting-to-know-you activity). Then, Ian asks folks to take it a step further by sharing it with others, and sparking conversations about the word choices and ideas. Maybe inspire others to write their own.

I decided to bring my new six (or seven) word memoir into a relatively new online space — Yap.Net (join in if you want — it’s a closed network for sharing works in progress, etc)– and ask folks for feedback.

I am no longer who I was

Actually, my original six were:

I’m no longer who I was

but the contraction seemed to be cheating, somehow, in my head when I read it to myself and so I broke it out. Which leaves me with seven instead of six.

What does it mean? I was going for the concept of each day brings a different you/me/us — with new experiences and insights — with echoes of the past but a step forward towards the future. Or something like that.

I shared my words out in Yap.Net and posed the technical question: Who or whom? (I wasn’t quite sure, because I thought Whom was technically correct with I as the subject, but it sounded terrible on my lips, while Who seemed wrong grammatically but sounded right on the tongue.)

Well, the grammar query sparked a conversation, with mixed signals, as one friend thought it was Whom but Who was better used, and another friend, self-described grammar queen, stated that Who is right, not Whom. Others jumped in with their own words, including one in the form of a poem and another that reads like a painting on a canvas, and the thread of discussion was neat.

Interestingly, I don’t think anyone called me out for the Seven versus Six.

I’m sticking with Who, by the way.

My friend, Sheri, wrote about public art sculptures in city blocks, and referenced a piano for playing on the sidewalk. I’ve been seeing more and more of these (although not yet in my city, which is interesting, since it is so heavily tilted to the arts). She shared a few images, and something stirred about a memory of my great-grandmother whistling a song as she made us tea in her home.

Sheri gave me permission to use her photo and I composed a few lines on piano. This song is not the melody of my grandmother, necessarily, but there are faint echoes of memory.

Notice, now, the keys,
the colors of the box, the way your eyes get drawn
to sound

You sit down,
curious – a muse of the streets –
a single note played,
speaks volumes

time rewinded,
your grandmother’s room,
the tune she whistled while making you tea,
you see

the piano
on the street corner
believes 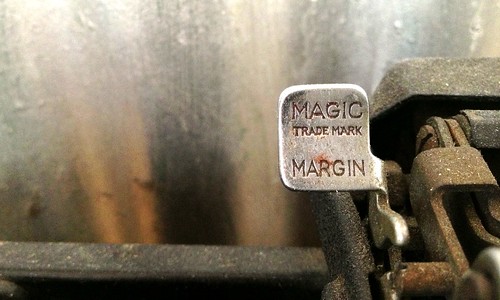 I am the ink-made marks
in the margins of the
text, the voice you’ve not
said out loud — not yet —
my comments and doodles
left like candy to the side,
all colored and sweet,
for my future self to complete;
I won’t hide them, these thoughts
tumbling from an active read,
and if the author ever notices
my presence on their page,
I’ll shout from this space:
I am here, I am here –
I build upon the idea
you left for me in there

This poem is part of my regular poetry writing, inspired by reading and interactions with others. This poem sprouted from other ideas about the margins of texts. You can read more poetry at the site where I gather my poems before they get lost. At least there, I know where they are.

Peace (left for you here),
Kevin

Page 2 of 54‹ Previous123456Next ›Last »
Thank you for visiting this online writing home. I am a sixth grade teacher and a co-director of the Western Massachusetts Writing Project. This blog covers a lot of ground -- from teaching, to writing, to music, to art and beyond.