This is an amazing claymation production from Poland of Peter and the Wolf as claymation. Another wonderful YouTube discovery. The movie, nominated for an award this year, comes in three parts.

Peace (in music, storytelling and claymation),

I just finished the book Ultimate Blogs, edited and collected by Sarah Boxer. She readily admits that a book about blogs seems, well, strange because, let’s face it, the peculiarities of blogging don’t always translate so well into a book format. And this book, while nice, is surely already outdated. That said, Boxer does a nice job of culling out some interesting writers from the Blogosphere and highlights their ability to create a very lively writing persona via their blogs. I didn’t like all of them but I did find myself enjoying quite a few of the bloggers in the book. 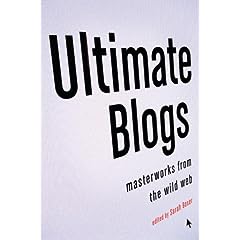 Here are a few that struck my fancy:

PS — Just for kicks, I did a video review of the book on Amazon. Wondered what it would look like. I am both excited and disappointed that our Youth Radio podcast community is going to be part of the 2008 MegaConference Jr. event today. I am excited because it is another way to showcase the possibilities of the collaborative project that brings together the voices and writing of young people from around the world. I am sad because our school is on vacation this week and I can’t get my class to attend.

But, lucky for us, we have Gail Desler, who is helping teacher Jim Faires bring their California class into MegaConference Jr. and she tells me they are planning to podcast their 25 minute or so presentation and seminar on the Youth Radio adventure. Their event begins at 5:05 p.m. (easternUS time) and the link to their event is here. I hope to try to pop in from home, if I can.

Youth Radio began as a way for my students and I to use podcasting with other students. First, it began through friends in the National Writing Project network but it has now branched out considerably to others in various online networks. The podcasts come and go, periodically, and it is a struggle for many of us find the time in our curriculum to really integrate Youth Radio. That is a reality. Another reality is that there are many school districts who are blocking all Web 2.0 applications such as blogging and podcasting, or there is such fear in the community about online predators, that such a project as Youth Radio can’t be sustained. That makes me frustrated on behalf of my colleagues and worried that this is the direction that my school district may venture.

When I watch my students listen to the voices of others around the world, or when they read the comments of peers from other states and countries, I realize the power of these connections through voice and writing. It is very meaningful.

Here is an example of a podcast thread this year. My class invented new words as part of a study of the English Language and we posted a podcast of the words on Youth Radio. A class from Spain was intrigued, and created their own words. That led to a class in Australia to want to do the same. Now we have all these creative words and all these wonderful voices.

Good luck today, Gail and Jim and our friends from Butler Elementary School in California. You make me proud! This week’s Day in a Sentence is actually Day in a Simile. (Once again, props go out to Larry for another great suggestion). Boil down a day or your week into a simile/sentence and share it out with our growing community of writers and teachers and others.

Just use the comment feature here on this post and submit your simile. Of course, podcast links and videos and any other format is always welcome.

Also, I have been tinkering with Google Forms (which is a quick survey that you can create within Google Docs and Spreadsheets) and I was hoping I could get you all to take a very short survey. First, I am interesting in your thoughts about Day in a Sentence. Second, I want to see how Google Forms works and I promise to share out the information when it is done. Oh, and here is my sentence/simile.

My week has been like one of my saxophone solos, with many many harmonious parts followed by a few bad notes that just made me cringe.

This video from YouTube is exactly what I have been looking for as an introduction to my students about stop-motion animation. I love the world of viral videos!

Page 2 of 6123456
Thank you for visiting this online writing home. I am a sixth grade teacher and a teacher-consultant the Western Massachusetts Writing Project. This blog covers a lot of ground -- from teaching, to writing, to music, to art and beyond.