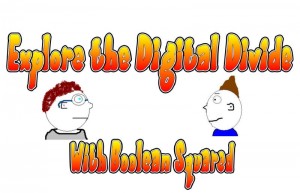 Over at my webcomic, Boolean Squared, I have been exploring the antics of a play written by Mr. Teach and performed by his students. The play is a twist on Alice in Wonderland, with a technological bent to it (Boolean is a virus, for example). This particular comic strip story was one of the first Boolean Squared I had done (back when I was using Strip Generator) and it was inspired by a play/musical that I wrote during my Summer Institute with the Western Massachusetts Writing Project. The play — called The Note Who Got Lost in the Masterpiece — is not about technology but about music, and I always envisioned doing it with my sixth graders. So far, I have chickened out, in part because of the time needed. But a few years ago, the play won a national competition and was performed by a youth theater group in Amherst and it was an amazing experience to watch the story unfold on the stage.

The comic strip allowed me to make fun of the process of putting on a play with young kids, particularly when the teacher is the writer and an actor is Boolean (he envisions being cloned, with multiple Booleans running rampant around the stage).

You can see for yourself:

Peace (in on the webby funny pages),
Kevin

PS — Here is a podcast of my Masterpiece Play that I put into the Internet Archive a few years ago.