Anybody who says Mad Magazine was for just kids didn’t ever read it.  Or didn’t read it carefully. I was reminded of this recently when I bought a book that featured five decades of the drawings and cartoon work of Sergio Aragones, who is the master of creating biting, funny critiques of all sorts of topics with pictures but very few words. (The book is MAD’s Greatest Artists: Sergio Aragones: Five Decades of His Finest Work). In fact, you have to read his work on a whole other level than you might expect, interpreting every nuance of every space of his comics.

Sergio has called his brand of art “pantomime humor” and in a short interview that introduces this collection, he talks about how this style came about partly because he immigrated to the United States from Mexico, and struggled with language. He decided that his art would not be fixed in an oral language tradition, but in the realm of visual literacy. His “outsider” status also allowed him to fix a critical eye on American culture, which informed much of his wacky insights.

And Mad Magazine was a true home for Sergio and his offbeat vision of the world, allowing him freedom to explore not only fun topics (video games, cell phones, mothers, etc.) but also some pretty serious social topics, too. (Later, he also created the Groo graphic novel series, which my older son just loves.) I went through and highlighted just a few topics in this hardbound collection that might surprise the casual reader:

OK, so that last one isn’t quite in the league as the others, but still, Aragones skewers everything and everyone and comes across as pretty balances in his humorous looks at our lives.

One of the things that I loved about his work with Mad Magazine, too, is that he was charged with doing all of the little cartoon drawings in the margins of the pages. These are tiny masterpieces of art, really, and often ignored. Luckily, in this collection, he has replicated dozens of these margin artworks onto a poster. You realize quickly that literacy is not just words, not just written language, but also art. One small image by Sergio Aragones packs a lot of punch.

Is this book appropriate for the classroom? Eh, no. Not at all. Too much nudity and too much content that might offend most sensibilities. But you could pick and choose from this collection, I suppose, and talk about telling a story with no words. Aragones is a master at that (did I say that already?)

Peace (in the toons),
Kevin 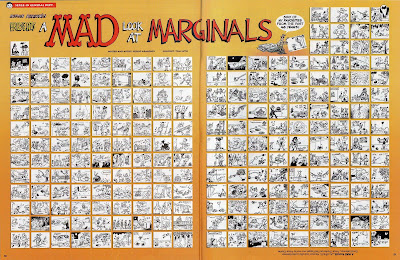 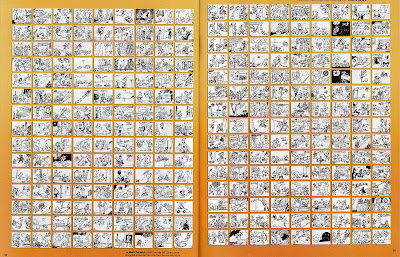