One of these books — The Red Pyramid by Rick Riordan — I read aloud to my six year old and the other — The Tiger Rising by Kate DiCamillo — I read as part of our independent reading unit in the classroom (Yeah, I read with my students and talk through what I am thinking as I read).

Boy, I wanted to like The Red Pyramid more than I did.  I dove in, all ready. The book never really delivered, which was hugely disappointing (particularly since the thing is more than 500 pages long). It occurs to me that Rick Riordan may have taken on one too many writing tasks in the past two years. Along with his book, which is the first in his Kane Chronicles, he launched an offshoot series of The Lightning Thief with the book The Lost Hero and has contributed to the 39 Clues series.

It’s not all bad. The Red Pyramid tells the tale of two children who are blood descendants of Egyptian Pharaohs, and who must save the world from destruction by using new-found magical powers, and allegiances to an array of Egyptian Gods and Goddesses. Like his use of Greek Mythology in The Lightning Thief, Riordan grounds the story is Egyptian Mythology. But it seems to much. There are more names to follow than you can imagine. I kept hoping Riordan provided a glossary at the back of the book (which would have been quite helpful).

There are sure glimmers of a good story here, as the kids (bi-racial siblings who spent their childhoods apart and drawn into adventure in the aftermath of their mother’s death and their father’s disappearance) tell the story in alternating chapters in their own voices.

Unfortunately, all to often, the story got bogged down. We wanted more excitement! More adventure! More, eh, clarity of story! Even so, my son and I are looking towards the next installment of the Kane Chronicles, which comes out in May. There was enough here to make it worth a possible dive back into the Kane kids and the world of Ancient Egyptian magic. 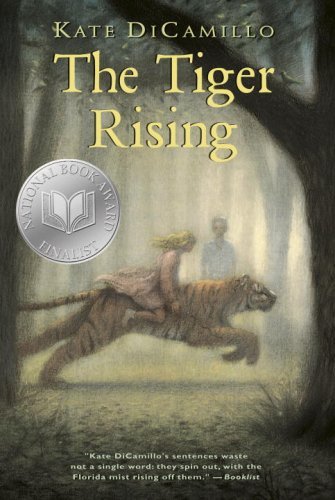 Meanwhile, I just finished a short, but beautiful book by Kate DiCamillo entitled The Tiger Rising. DiCamillo is a wondrous writer, and if you read The Tale of the Despereaux (the book, not the movie) or The Magician’s Elephant or any of her other books, you know she has a talent of weaving stories together.

Here, she brings us into the world of Rob, an adolescent now living in a run-down motel in Florida with his father. Rob’s whose mom died (is this a theme or what?) and his father refuses to grieve, or let Rob grieve. So all of his sadness and emotions are locked down tight (in a “suitcase” that Rob imagines he drags around with him). Into this world comes spunky and thoughtful Sistine, a girl of Rob’s age who has her own problems: her father cheated on her mom and they have come to live in Florida, too. Like Rob, Sistine is completely out of place.

The tiger is an animal they find caged up in the woods. It’s the property of the owner of the motel, where Rob’s dad works in a low-paying job, and Sistine is determined to free the tiger, much to Rob’s initial dismay. They eventually do free the animal, only to have Rob’s father shoot the tiger and kill it. That tragedy finally opens the door for Rob and his father to grieve over their own loss of mother and wife.

This is not necessarily a tidy book (and not as strong as The Tale of the Despereaux either), but that untidiness is a good thing to me, as a reader. Not everything gets put in its place by the end. The story risks the artifice of a “lesson learned” as opposed to a “story told” and I feel that DiCamillo found a certain balance.  Sistine still feels abandoned by her father. Rob still is an outcast. But Rob and his father do finally find each other, and Rob has found a true connection with a new friend, Sistine. The language here in The Tiger Rising is lovely and the pacing, just perfect.

I quickly passed this book on to a student, who has since passed it on to her sister.