Novelist Paulo Bacigalupi sees chaos in the future, with the seeds of that chaos planted in the decisions we are making — or rather, not making — around environmental issues right now. Two of Bacigalupi’s books that I have recently read — Ship Breaker and The Wind-up Girl — swirl around a future in which the world has been altered forever in a dystopian way by environmental neglect and powerful climate change. Both books have you wondering anew about what kind of world our grandchildren will inhabit, and if not a world as bleak as Bacigalupi lays out, will it be anything close? 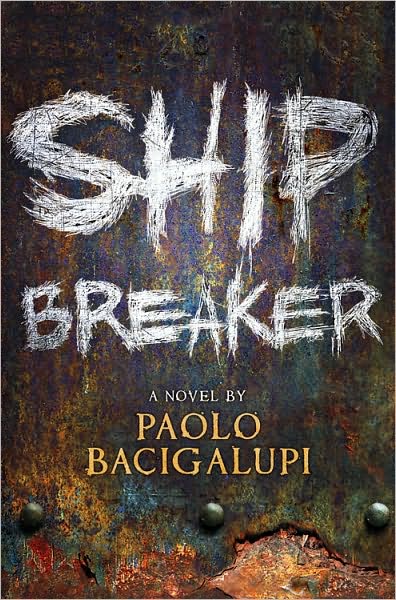 Of the two books, I found Ship Breaker to be much more engaging in both character and story. The book is also for young adult readers, so I was reading it in class this spring. The story set in the future revolves around a boy named Nailer trying to survive in a world where oil rigs and ships lay scattered along the Gulf Coast as a result of a failed energy policy of the past (or, rather, our present), and ship breakers are teams who scavenge the hulls for precious metals and other re-useable parts. Honor and betrayal are part of life. Huge storms come in with very little notice. The work environmental is brutal. And a distinct class system has set in. I liked the pacing of the narrative, and also the development of the main character, who is dealing with a violent father while still laying out some hope for a future that will have Nailer sailing on the massive Clipper Ships he sees in the distance.  When opportunity arises, Nailor jumps into the unknown, and sets things in motion that ultimately pay off for him. (See Amazon video of Bacigalupi talking about the story development)

The Wind-Up Girl is for adults (with violence and sex), and is slightly different in its narrative tone. Here, the future is shaped by geopolitical events that have decimated many of the countries of the world, leaving only a few to survive on wits and science and the hoarding of environmental know-how. Bacigalupi weaves in the narratives of a handful of characters as a tightly-knit and controlled society of Thailand that slowly careens apart, and comes completely undone. One of the main prizes being sought is a seed bank, a massive archive of pure genetic seeds for food that won’t be riven with disease. The wind-up girl in the title of this novel is a robotic humanoid whose desire for freedom, after becoming the source for depravity by the powerful elite, becomes an all-consuming thing. Her quest for a better life, however, leads her into violence that unwittingly dismantles the entire society, and shakes the world at its foundation. Morality, technology, politics, revenge and the environment are all at the heart of this story.

Both books certainly make you ponder the future of our planet, and the stories did have me thinking of how much we take for granted that the government knows what it is doing. We place a lot of trust in those who are power to be foresighted in what they are doing. But sometimes, the most innocuous decisions are the ones that have the most far-reaching impact. (Inaction on climate change?) You just don’t always know it at the time. Bacigalupi takes that premise and runs with it, creating stark picture of the possible future to come. His writing is crisp, his characters are interesting and his settings are eerily familiar scenes of what-might-come.

Peace (in a better world than this),
Kevin