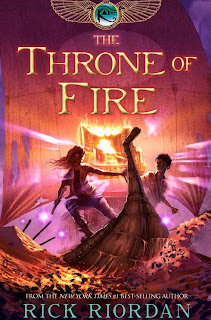 I’ve written before about my wonder at how in the heck Rich Riordan can write and publish so many books. And I have worried that the pace of publishing might diminish his appeal. Well, not quite yet. I just finished up the second of the Kane Chronicles series — The Throne of Fire — as a read-aloud with my son, and we both enjoyed it quite a bit. This series is not on the same scale as The Lightning Thief series, but perhaps that is because I am used to Riordan as  a writer now.

This book follows brother and sister Sadie and Carter Kane as they try to save the world from Chaos. Steeped in rich and odd Egyptian mythology, the book follows the Kanes as they try to re-awaken the Sun God, Ra, from his self-imposed slumber in order to find balance in the world as the evil spirits of Chaos begin to rise. They somewhat succeed, but at some terrible costs that set the stage for more books in the series.

As we were reading the book, I kept imagining that in Riordan’s mind, there will be a slow convergence of the stories unfolding here in the Kane Chronicles and in his new Lightning Thief spin-off — The Lost Hero, which I liked immensely, and which I see will have a sequel on the stands in October (see!) — in which the protagonists of both storylines slowly come together. I kept imagining characters here as having shadow stories in the other book, and in The Lost Hero, there are characters — including Percy Jackson — who have gone missing. Maybe they are stuck inside another cultural mythology? If it comes true, remember that I wrote it here first.