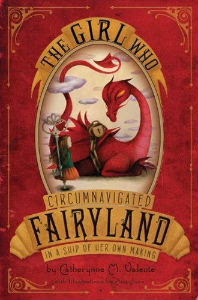 This novel gets not only a rave review here, but also the award for the longest dang title that I have come across this year. The Girl Who Circumnavigated Fairyland in a Ship of Her Own Making by Catheryn Valente is a magical story that apparently began as a story-within-a-story of another of Valente’s adult novels. This book unfolds with magical twists that echo other famous stories and it comes packed with more than a few obscure English words that had me wishing for a dictionary (or an app for that). I read this book as read-aloud with my six year old son, and while some of the vocabulary had us both scratching our heads, the story itself kept us coming back for more, and more, and more, and I thank my friend, Donalyn Miller, for the recommendation on Twitter. 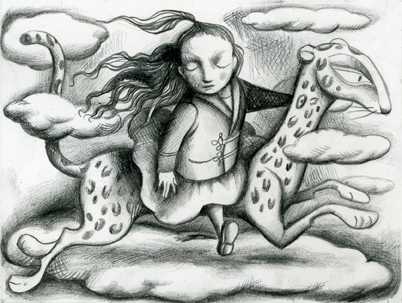 I won’t give the tale all away, except to say that the protagonist — a complicated yet engaging girl named September, whose mother is a mechanic and whose father has been sent off to war — makes her way to Fairyland with the help of the Green Wind (on the back of a leopard), and she must deal with all sorts of conflicts in order to steer her way to the end of the tale, where the gears of Fairyland and the real world come together. September’s nemesis, the Marquess, wants to pull the gears asunder, dividing the intersections of magic forever. The ending is really quite wonderful, and Valente wisely leaves open the doorway to future stories of September and Fairyland (although what that title would be is something to think about). Woven like a tapestry of fairy tales and stories of magic, with periodic intrusions by the narrator/writer, The Girl was a wonderful diversion from the summer heat for my son and I.

What more can you ask? Oh, and add in a dragon known as a wyvery, whose grandfather is a public library … yep … you read that right … and a witch whose magical power comes from a spoon … yep … and a herd of migrating bicycles ….. sure … and you should get a little taste of what is in store.

As I put down the book for the last time (and then lent it to my nieces for read-aloud at their house), I imagined all of the young readers I have had in the past who would devour this story and whose imaginations would be enriched by the tale and the words, and the technique of this writer. I’ll be on the lookout for them this coming year.

Peace (in the fairylands of imagination),
Kevin