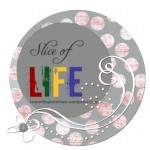 (This is part of the 2012 Slice of Life Challenge with Two Writing Teachers.)

Here is a rundown of what happened in and around our house yesterday as the first (and last?) snowstorm of 2012 caused schools to close for the day: