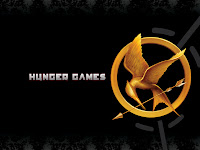 So, every blogger in the universe is probably reviewing (or has already reviewed) The Hunger Games movie. I’ll keep it short here.

I’ve only read the first book in Suzanne Collins’ trilogy, so my “bigger picture” of the narrative is fairly limited. I did enjoy the book (but found it a bit violent, just like her Gregor the Overlander books) and I enjoyed the movie, too. I took my 11 year old son with me to the packed theater on the Sunday afternoon matinee. He is an avid reader, but admitted that he could not get “into” the book, The Hunger Games.

“I am only one of four kids in our whole class who hasn’t read it,” he admitted.

The movie is pretty faithful to the book, as I recall it. It was not like The LIghtning Thief, where we walked out of the theater shaking our heads at the changes that had been made and wondering, why in the world would they do that? I think the casting in The Hunger Games was nicely done. I did feel an emotional connection with Katniss, and my son and I were both shattered to watch Rue die. We both jumped out of our seats when those genetic dogs jumped out of the dark, too, even though we knew it was coming. The two hours and 20 minutes did not seem like a lifetime in our seats. We were hooked right from the start.

The one thing I miss from the book was getting inside the head of Katniss, as she gets conflicted feelings about the two boys: the one she left behind and the one she needs to survive. I also missed her simmering anger at the Games itself, and how she refuses to be a pawn, even though — in the end — she is. For me, those elements of Katniss are what made the book special. Those inner dialogue and inner conflicts are hard to translate into the big screen, I know. But it gave a certain flatness to Katniss in the movie.

Overall, though, The Hunger Games movie is a hearty thumbs up — from one who has read the book (me) and one who hasn’t (my son). I wonder if seeing the movie might get him interested again …