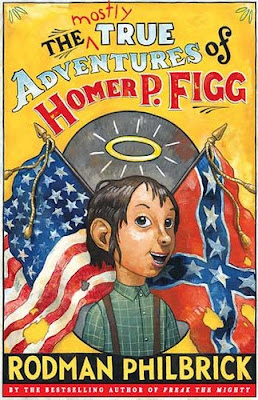 “Telling the truth don’t come easy to me, but I will try, even if old Truth ain’t nearly as useful as a fib sometimes.” — Homer P. Figg

I’m not sure why it took me so long to pick up The Mostly True Adventures of Homer P. Figg by Rodman Philbrick. I don’t mean, buy the book. I’ve had it for about a year. First it was at my house, where I hoped my son would pick it up (he liked Freak the Mighty, which Philbrick also wrote), and then it was on the shelf at school. And it seems like one of those books I would like: the cover was pretty interesting (done by David Shannon), the title is intriguing, and the plot teaser had me hooked.

Oh well. It took a while but it was worth the wait.

While I could not help shaking the echoes of Mark Twain’s Huckleberry Finn from my head as I read the book (which is not a negative thing, by the way), the story of Homer Figg going off to save his older brother from his conscription in the Union Army of the Civil War, and all that happens to him on his way (with Quakers, runaway slaves, con men, medicine show men, spies and more), propels the book along at a solid pace. There’s rarely a boring passage to be found here, and even with all of the adventure (with a little hyperbole thrown in for good measure), we still come to care deeply for Homer Figg, who may lie a little here and there if the situation warrants it, but whose heart is always in the right place.

And it turns out, you learn quite a bit about the Civil War, too, as Homer’s story pushes up against the Battle of Gettysburg and more. It’s a lot to ask of a book to entertain and educate, and yet, Philbrick does that here, without any of the overt preaching that can often afflict too many historical novels for young readers. The Mostly True Adventures of Homer P. Figg is definitely worth a read.