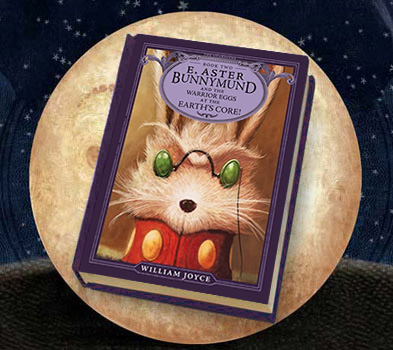 This is a bizarre book. Which is not to say the second installment in William Joyce’s new series of The Guardians of Childhood is not interesting, but it is bizarre. E. Aster Bunnymund and the Warrior Eggs at the Earth’s Core picks up the story where the first book — about Nicholas St. North — ends, and the battles against Pitch, the Nightmare King, continues. While the first book established the mythology of Santa Claus (although, never outright), this one establishes the myth of the Easter Bunny (but again, never outright).

Here, our heroes — Nicholas St. North, the wizard Ombric and the girl, Katherine — must venture down into the center of the earth to save their young friends who have been kidnapped by Pitch (who wants to use them as leverage to gain access to magical powers). Along the way, they meet and learn about the Pooka, a long-eared, long-lived creature called Bunnymund who hails from outer space who keeps tabs on the Earth from the center of the planet. This is the bunny, and he has an army of warrior eggs which made my son crack up every time he saw pictures. They are funny things – eggs armed to the teeth with bows and arrows.

This series is tied into the movie franchise now underway, and Joyce is clearly developing alternative histories to common icons of holidays and stories and traditions — next up is the Tooth Fairy. While I find myself slipping in cynicism (thinking: these books are merely props for the movies aimed at kids like my son), I also find myself acquiescing to the adventure of the stories, and the ways that Joyce weaves magic and adventure, along with the power of belief, into the narratives. The books are good for read-aloud, and my son is thoroughly enjoying them. He gasped when it seemed as if North was going to die from a sword wound by Pitch. He jumped off the couch with a prediction about the connections between Pitch and Katherine. He guffawed at the sight of Bunnymund using his power to transform into a bunny warrior.

And in the end, that’s what’s important, right?

Peace (in the center of the earth),
Kevin

PS — by the way, the bunny looks very different in the book as compared to the movie. The beefed up the movie version into more of a warrior, and adding Hugh Jackman’s voice gave him more depth as warrior.