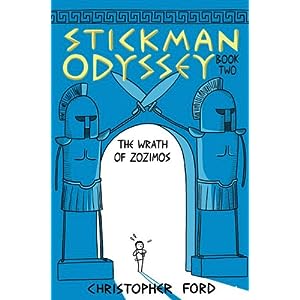 I wasn’t sure what to expect with The Stickman Odyssey, although I seem to remember a long time back seeing some of the frames by writer/illustrator Christopher Ford at his online site. I thought it would be yet another retelling of The Odyssey, which I can certainly live with but there often seems to be a lot of them out there. Ford takes his stories, told in characters who are little more than stick figures, in directions that echoes the ancient texts but keeps an original storyline going. With lots of humor and character.

In brief, the story in the two books (Book 1 and Book 2, The Wrath of Zozimos) is about the main protagonist hero — Zozimos — who is an exiled prince who seeks to return home to retake his lands. But of course, there are all sorts of adventures and mythical creatures and obstacles in his path. He hooks up with a band of friends, with various strengths and weaknesses and stories unfolding of their own, and Ford weaves an epic tapestry of comic art here in The Stickman Odyssey. The books really do honor the myths while building on them with humor and invention. Ford is able to this because he pays attention to character development, which you sort of have to do when everyone is a stick figure (the books are subtitled: An Epic Doodle). He imbues the characters with identity, and those weakness and strengths of character carry the plots along at a quick pace.

I enjoyed The Stickman Odyssey stories, but I had trouble finding the books in my house, as my three sons were also reading and enjoying the stories, too. By the way, we all agreed that the second book was a bit more exciting than the first book, but it may be that we got to know the characters a bit at that point.

Peace (in the sticks),
Kevin