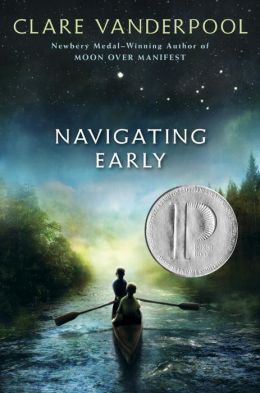 You know how sometimes you hear a lot of folks talking about a book, and then it goes on to win some major award, and for some reason, you never get around to reading that book? That’s been me with Moon Over Manifest. Heck, even my son read it and raved about, and the book is sitting in his room. What’s wrong with me? Well, writer Clare Vanderpool has her second novel out, and I read Navigating Early in a week (Thanks to a strong recommendation by my friend, Colby Sharp), and I have to say: I need to dig out Moon Over Manifest and get reading!

I won’t give away the story of Navigating Early but I will say that Vanderpool weaves a powerful narrative of many strands and with such creativity and touching passion for her main characters — the narrator, Jack Baker, and his friend, Early Auden — that you can’t help but get drawn in, if only to see how Vanderpool is going to pull it off. She does, and she does so magnificently, in my opinion. In particularly, she deftly handles the character of Early Auden, whose quirks come to light early and establish the narrative push forward that sends the two boys onto a Quest into the deep woods of Maine. I never felt as if Vanderpool was anything other than compassionate to Early, and to Jack, who has his own struggles. It’s a story of friendship, and family, and finding out what makes your heart tick.

I am still thinking about the story and the characters, and the story within the story, days after putting the book down. Reading a book like Navigating Early reminds me of why I love to read — it’s the mystery of experience and the magic of writing.

Peace (in the navigation of the inner world),
Kevin