If you have been following my writing this month, you will notice that I am diving deep into six word memoirs for the Slice of Life challenge. (And thank you for reading them, too. I appreciate it.) As it turns out, the National Writing Project and the Mozilla Foundation have created a site with the webmaker tool, Thimble, on the Six Word Memoir theme.  (You can read more about the project at Digital Is.)

So, I gave it shot this weekend, and found it interesting. Since it designed both to create a six word memoir AND teach a bit about coding, the composition takes a bit longer than it would normally do. But I liked the site, and here is what I created: You can try, too. The Six Word Memoir Thimble site is open and accessible to all.

Peace (in the six words),
Kevin I’ve had a lot of ideas around songs lately, and this one came about as I was reading news articles about the gridlock in DC. I don’ t think this song is right for my rock band, Duke Rushmore, so it may just sit on the side for a bit until I figure out if it has legs for something else. (It might lead to a digital story.) The theme is inspired a bit by Steve Earle, who wrote Christmastime in Washington with references to Woody Guthrie. There was a time when all I wrote were political and protest songs. But that seems so long ago now. It felt as I were slipping on some old clothes with this one, remembering the anger at the establishment for having ideals so different from my own.

Thanks for listening and for reading …. 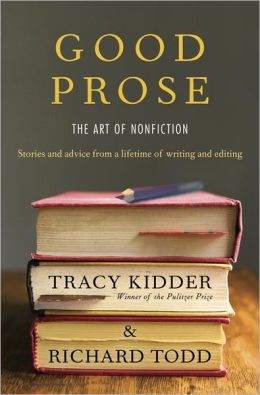 What I wouldn’t give to be in the room as writer Tracy Kidder and editor Richard Todd hash out ideas for books and magazine articles, and go through the entire process from start to finish, when they read out the work together in a final run-through before publication. In reality, it would probably be boring. I know that. But as captured in their new book — Good Prose: The Art of Nonfiction — the partnership between writer and editor is so pitch-perfect, and so collaborative, that one feels sad to realize that that not every writer probably has that kind of relationship with an editor.

While Good Prose does center on advice for writing non-fiction — ranging from topics of telling the truth to structural decisions around longer narratives to the ways writers use language for effect — I found the sections where Kidder, a Pulitzer Prize winning writer (for Soul of a New Machine, about the very beginning of the computer revolution), and Todd, his editor and a writer himself, share words about their relationship as collaborators over four decades, and offer an insider’s glimpse into the way Kidder writes, to have been the best parts of an excellent book.

I should note a few things here. First, I have met Kidder before. He lives in our neck of the woods, and when he was doing research for his book, Hometown, he was sitting in the same meetings and watching the same news unfold as I was, in my role as a newspaper reporter. I won’t say he would know me if he saw me (he wouldn’t) but I have had a keen interest in Kidder for a number of years, as one often does with local authors who have won the Pulitzer Prize. That said, I have not always found his writing to be my style. There’s something about his books that removes the reader from the emotional center of the story, in my opinion. Even the book I thought I would love – Among Schoolchildren — didn’t quite touch me the way I thought it would. I did enjoy Mountains Beyond Mountains, however, and I realized as I read Good Prose why that is: Kidder injects himself into a first person narrative in the story of Dr. Paul Farmer. By doing that, he brought me, the reader, into the story with him. He closed the gap between reader and story. And I have met Richard Todd, too, as he is the father of a friend of mine, whose son (Todd’s grandson) is one my son’s best friends. We’ve never spoken more than a few words, however, and I never even knew he was Kidder’s editor.

My own difficulties with connecting to Kidder’s writing (and most people have nothing but praise for Kidder’s style) were not an issue here, as the vignettes and stories of researching and writing stories forms the heart of this book, and the two men do a fantastic job (Todd, in particular, has a fantastic way of telling a story with humor and English-style reservation, it seems to me). The craft of non-fiction goes deeper than I imagined, and I admire the kind of research and writing/revising/rewriting that Kidder undergoes to pull together a story from his notes. He admits he can spend a year or more rewriting draft after draft, trying to get it right. Todd’s role as arbiter of ideas, supportive friend, attentive reader is a crucial part of this relationship, as he guides Kidder forward along various paths.

If you are writer, or wish to learn more about the art of non-fiction, (or teach non-fiction writing) I’d suggest you go no further than Good Prose. It will invigorate you, and remind you that the act of writing — writing well, anyway — is a craft all unto itself, with decisions that will stake out a path forward for the story. The amount of dedication (and, as Kidder reminds us, sheer luck) it takes to succeed is difficult, but a worthy journey to undertake if you need to tell the story.

Peace (in the first days of spring),
Kevin

(Note: I wrote the story in this post during last snow day. Today, we have yet another, reminding me that I never posted this one. — Kevin) During a Snow Day when I was home but my wife and kids were not (I work in another district), I explored this story site called Tapestry, and created this story. The site works by advancing the story along with a click of the screen (or a tap if you use the App). There’s a certain beauty to having words unfold like that (although you can’t go back once you’ve started, unless you begin from the beginning).

This is for Slice of Life. The NCAA comes around every Slice of Life, so I feel a bit as if I have posted this before, although it was last year (and the year before that). This year, neither my local team (UMass) nor my favorite team (UConn) are in the mix, so I feel a bit removed from the emotional drama of March Madness. Still, I got my brackets ready.

Peace (on the court),
Kevin

We are into Quidditch season right now and each sixth grade class gets to vote on a team name. We do it as open as possible, and the voting takes place over a few rounds (sort of like a Town Meeting election). First, we generate a list, and then we go through a series of votes to narrow things down, before finally ending up with a team name.

This year, they voted for …. The Sizzling Smurfs. (You should know that our class color is blue and the girls in my class as the leaders.)

I sort of like The Blue Eyed Peas, myself, but I don’t vote. They do.

Here is where we started: Here is where we ended up: This is for Slice of Life. We took our youngest to the Holyoke St. Patrick’s Day Parade yesterday. We figured he has to go at least once to one of the largest St. Paddy parades in the country (about 400,000 people come to watch). It was a bit cold, but it was fun, too. Who doesn’t like a good parade?

Shivering; Wondering, waiting for the parade. #slice2013 #6words (w/400,000 other spectators. It was fun.) twitter.com/dogtrax/status…

Peace (in the green),
Kevin I’ve written before about our Crazy Dictionary project, which is near the end of our Origins of Words unit. Students invent their own words, and then add them to a wiki dictionary that we have been building since 2005. There are, by my calculation, more than 700 invented words (and a few hundred podcasts) on the wiki site now. It’s a fun activity but what I like most about it is how my current students are collaborating with past students (including some siblings) to create a dictionary of invented words that each year, grows and grows.

The wiki is a perfect venue for this activity and there is quite a bit of excitement on day we set up stations around the room to add words and record podcasts. And the fun is in the name of learning about words and the flexibility of the English Language to weed out and add new words all the time.

Peace (in the language),
Kevin

Peace (in the wheels),
Kevin

Page 3 of 71234567
Thank you for visiting this online writing home. I am a sixth grade teacher and a co-director of the Western Massachusetts Writing Project. This blog covers a lot of ground -- from teaching, to writing, to music, to art and beyond.