This afternoon, I am facilitating a session with the Western Massachusetts Writing Project around hacking literacies. It’s part of our year-long inquiry around digital literacies. I’ll share out some of the work (playful work) we will be involved with, and the sites we are using, tomorrow. But I created this slideshow of quotes from Douglas Rushkoff’s book, Program or Be Programmed, as a teaser for the start of the session. (The book is great, by the way, and I highly recommend it).

This is for Slice of Life, capturing the start of spring baseball with my youngest son.

I wasn’t there but Doug Belshaw shared his slideshow for a presentation he co-facilitated around supporting a new generation of digital makers. I’m fascinated by this direction, and wonder (again) how to balance this idea of technology, creation/making and school curriculum. Doug’s presentation reminded me of the resource that I had developed over at NWP’s Digital Is around a similar concept — of connecting the Maker’s Movement with the Digital Composition concept.

Peace (in the making),
Kevin
PS – I get an email newsletter from Doug that is just consistently full of interesting and wonderful resources. You might want to consider subscribing, too.

This is for Slice of Life. Yesterday was the first real signs that Spring has not forgotten us. “Why is this written like a poem?” was my son’s first question as he scanned the book that we were going to do as read-aloud. He always flips through the books we are going to read together, scanning the pages for clues of the story. Bartholomew Biddle and the Very Big Wind by Gary Ross (with illustrations by Matthew Meyer) was not what we expected when we ordered it through our library’s loan system, but that’s OK. It is different for us, so used to reading novels together, and this verse-style picture book for older readers about a boy who decides to catch the wind one night and fly away worked just fine for us. (See excerpts from the book at NPR)

With echoes of Seuss (the character’s name alone had my son asking about it as he remembers Bartholomew from the Oobleck and other stories), the story takes off as the boy soars in the sky, with his bed sheet as a sail, and goes off on adventures, making new friends, cavorting with pirates and then getting stuck inside a canyon with other flying wayfarers (including Amelia Earhart) before finding a way out. As most stories of adventurers do, Bartholomew makes his way home by the end, changed by his experiences and appreciative of things he did not appreciate before.

I wish there had been more illustrations from Myers, whose depictions were a wonderful addition to the couplets of the story by Ross. There is a high level of vocabulary in the verse here, which is not a bad thing but something to know, and I wonder how the story might have been different if told in prose. I never really answered my son’s question about why the book is written as a poem, other than to say that the writer chooses and the reader reads, and maybe the poem style was how the writer best saw the story in his head. (I later found an interesting backstory by Ross, who is a Hollywood director, on how he came to write the story.)

As it is, the book was a nice different kind of reading for us (we’re back with a novel), and so I appreciated the surprise of it in form and content. I’ll let the next wind carry it back to the library so that some other adventurous reader can enjoy the journey.

This is for Slice of Life, as I share out my six word memoir from yesterday. I spent much of the snow day huddled over words as I wrote a song, and then over my iPad and laptop as I recorded a demo version of the song.

And the song demo:

The back story of Three Times Lucky grabbed me (baby gets washed up during a Hurricane and then grows up to be adoptd child detective in small town where everyone knows everyone’s business … or so they think). And I liked the character of Mo, the girl who helps solve the mystery in her town. She’s all spunk and intelligence. But I wasn’t all that engaged with the writing, for some reason. It rang false to me (I say this as a a northerner not attuned to southern dialect, so take that comment for what it is — it still felt like I was reading stereotypical dialogue). And I could not ever shake that feeling as I read the story, even as I wanted to find out how it all ends.

It ends well, and Mo’s intuition and detective skills rise up to the surface, redeeming the book for me. Writer Sheila Turnage wisely brings another storm into focus as the plot thickens, and Mo and her best friend try to solve a kidnapping, a murder and an old robbery. You cheer for Mo, a “rising sixth grader” with a huge heart and worry about her birth mother whose presence is only felt in the message-in-a-bottle missives that Mo sends forth into the world from her adopted home.

Peace (in the mire),
Kevin

Six words that captured it all. The podcast elaborates. Part of the Slice of Life writing challenge.

Peace (in a rough ride),
Kevin

This is for the Slice of Life Challenge. It’s the start of Quidditch season at my school.

And how we play our version of the game: 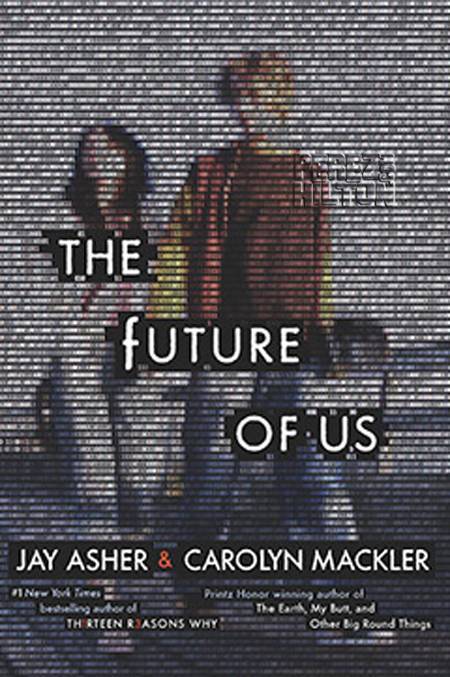 The hook to Jay Asher and Carolyn Macker’s book – The Future of Us – is intriguing. Two teenagers log into AOL in the mid-1990s, only to discover something called Facebook bookmarked on their computer, which allows them to view their futures through Facebook status reports and friend  networks.  They are lurkers in their own futures.

Built on the science fictional concept that what we do today changes our futures tomorrow (so be careful what you say and which friendships you make and break), the novel balances the angst of the high school years with worries about the futures ahead of us. As Emma and Josh, two best friends from childhood now having a strained relationship as teenagers, view the future through the lens of Facebook, they scrutinize every move, every word, every relationship, in hopes that they will be happy someday. (They also make snarky observations about the future where everyone shares every little thing to the whole world.)

We never do learn why the AOL CD-ROM they use provides them a glimpse into Facebook (nor do they ever really use AOL for anything other than looking at Facebook), but the cultural and pop references (the emergence of Dave Matthews, for example) in the lives of Josh and Emma brought me right back to those mid-1990s, and I remember distinctly the first time I sat down at my friend’s computer and logged into AOL, and began an online conversation with a stranger around William Gibson’s novels about the future. It was eye-opening that a computer would connect me to a community.

The plot of The Future of Us moves along at a nice clip, alternating between the first person narratives of Josh and Emma. It’s nice that they come to understand one of those universal truths of life that Saul Bellow once used for his own famous novel: Seize the Day. Live in the day, not in the future or past.

Peace (in the here and now),
Kevin

Page 5 of 71234567
Thank you for visiting this online writing home. I am a sixth grade teacher and a teacher-consultant the Western Massachusetts Writing Project. This blog covers a lot of ground -- from teaching, to writing, to music, to art and beyond.