Mary Lee posted an interesting photo this morning of a telescope in Chile, shooting out its beams to outer space. (This part of Mary Lee’s use of media to inspire poetry and learn about copyright issues.) This is the poem that I wrote:

Riding lights;
writing nights;
The sky falls down
in a gentle rain of heavenly sights.
We gather hands and dance
amidst the possibilities
of chance that somewhere,
perhaps unaware,
someone else is looking out as we look in,
our eyes both extended into the stars
even as our words get scribbled out,
near and far, letter by letter,
line by line,
in this data-strewn world of virtual space. Leave it to Bud to come up with a little twist in his sharing of images this month to inspire poetry. Today, there was no image. Instead, in its place was a message saying the photo had been redacted and removed. That inspired me to write this poem.

This day, I fear, has gone in reverse –

so that every door opened, shuttered;

every kiss given, returned;

to the point where driving out becomes merely coming home,

and tonight, as I sit down heavily on the bed,

book in hand, ready to read to sleep to dream,

with coffee percolating in the air

and words dangling along the edge of the wilderness,

where stories graze on the embers

of night, and still,

Our Western Massachusetts Writing Project has been working in partnership with an urban middle school on strengthening the writing and literacy instruction. One aspect of that project is that teachers have to design and launch a classroom research/inquiry project. What we found was some confusion over what that should look like, so along with written instructions (and future one-on-one sessions),I created this short video as another way to explain what inquiry might look like. Our Western Massachusetts Writing Project has an ongoing partnership with the local newspaper to feature teachers writing about educational issues on a monthly basis. This month, I wrote about going to a School Committee meeting and watching teachers become political advocates for learning, and for kids, and urging the rest of us to find our voices, too, when it comes to educational reform and issues.
I created a modified podcast of the article (which you can read through the link off the WMWP website).

Peace (in getting heard),
Kevin

Mary Lee, over A Year of Reading, has been teaching us about the use of Wikimedia Commons for accessing and using images, videos and more in the common domain. This morning, she shared a lovely audio file to two harps playing (and some of her students’ poetry) and I wrote this:

While my left hand, fingers, float,
my right hand navigates the interior
of melody,
scaling solid lines of notes
shimmering at an altitude that no one else knows.

While my right hand, fingers, finesse,
my left hand follows the heart
of harmony,
skirting the outlines of sounds
weathering the storms that one else
hears. Most schools set up some sort of teachers versus students athletics event. At our school, we’ve played our outgoing sixth grade class in basketball (until a teacher broke her leg), stickball baseball (until weather made scheduling unpredictable) and last night, we ventured into new terrain: Quidditch. Our school plays a version of Quidditch, and the sixth grade classes face off in a full day of Quidditch activity. That was yesterday, during the day (my class team — the Sizzling Smurfs — played admirably but did not win the Quidditch Cup). Last night, we went back to school as teachers faced off against students.

It’s exhausting just to think about. Our game has a lot of running, a lot of maneuvering, a lot of shifting and strategy. Did I mention running? There’s a lot of running. We decided to name our teacher team Pink Fury, and the DJ (Yep, we have a DJ) played a lot of pink-related songs — Little Pink Houses, Pink Cadillac, etc. He played the opening riff to Van Halen’s Hot for Teacher, too, but only enough to get laughs out of the adults. The kids don’t likely know the song. We had about 18 teachers, but there were about 60 students, so guess who had the fresh legs? But we held our own, taking an early lead and holding it for most of the game before losing the lead, and then regaining it, and then in the last minute, we came charging back from a 10 point deficit, only to lose the game by a single point. And that’s how it should be, right? We’ll give the kids the bragging rights, but we teachers did OK (and our principal did fine, too.)

It was an exciting and fun night, and we sixth grade teachers certainly saw Quidditch from another angle. We are often on the sidelines, as the team coach, and not in the field, as the player. There’s a lot to keep track of, and I think I have a little respect for the kids who excel and a more humbling view of the kids who sometimes seem confused by the game. I was one of those confused ones last night for a stretch. And now, I am sore.

Peace (in the game),
Kevin
PS — I have shared this before, but here is our video on how to play our game of Quidditch.

Bud Hunt posted this image this morning, as part of his push to inspire poetry with images (although I seem to be the only one writing at his blog space …) That image led me to write this poem (perhaps thinking of audience, or lack thereof, at his space this month):

It doesn’t help that you are so out of focus –

No twisting of the lens

standing there, in that desolate space,

with your eyes in your hands,

and my mouth at your ears,

waiting to understand what it is that I said –

the meaning is gone;

I grabbed this from  blogger Andrew Wales, who does a wonderful job with creating graphic stories and panels that captures his views  of the world (mostly art, but also, teaching). This one is about reading, and comes from his notes after reading a book about the teaching of reading. It connects nicely with Common Core’s push that everyone is a teacher of literacy. 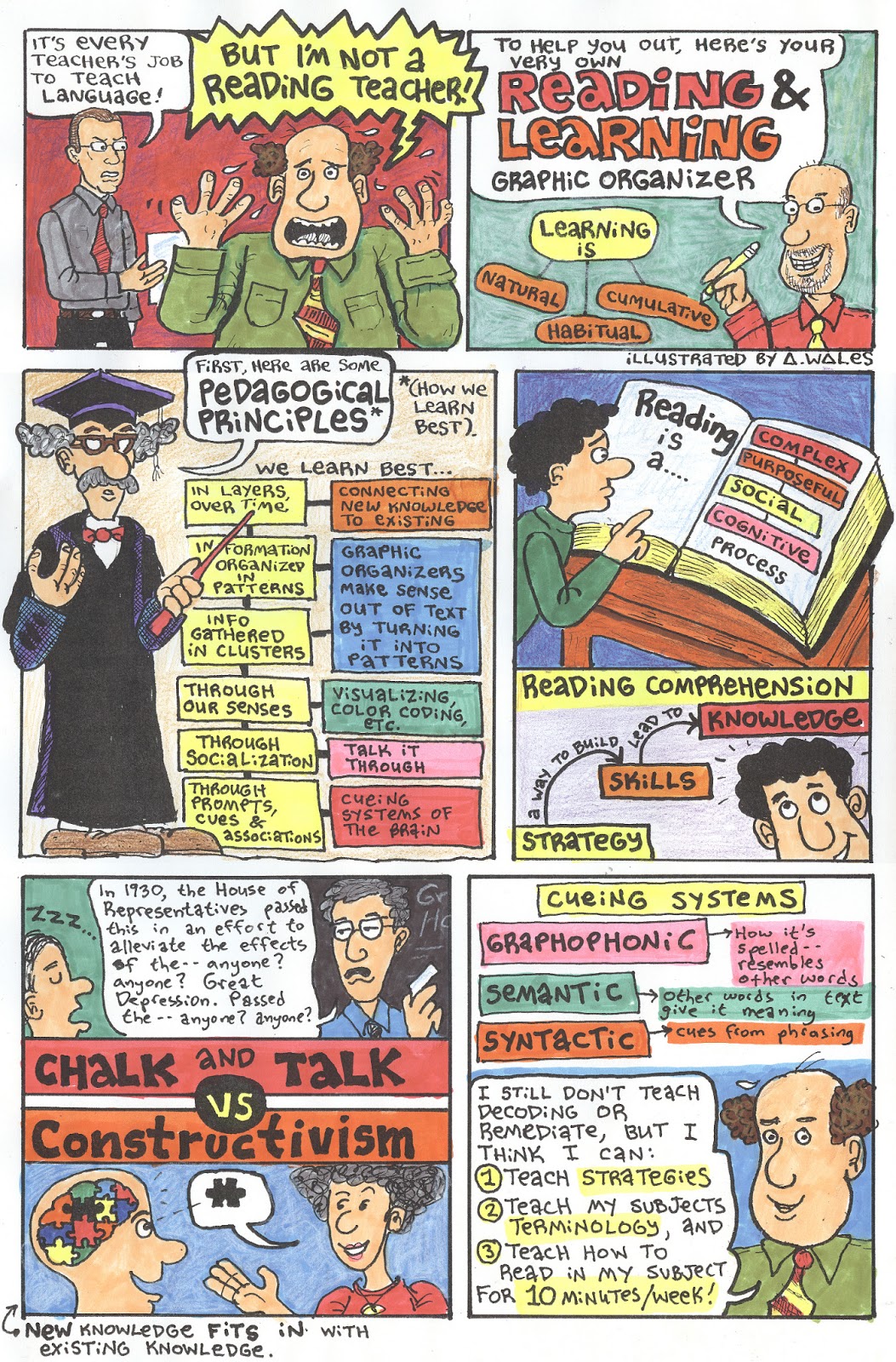 As I have written, I have two classes of students finishing up the writing of an Interactive Fiction project right now, using the software Twine to build and publish stories with multiple arcs. Before they started writing, I had them conceptualize their story ideas in the form of a story map. Here are two of them (we modeled this strategy earlier by having them map out one of the Choose Your Own Adventure novels they were reading.) Peace (in the branches)
Kevin