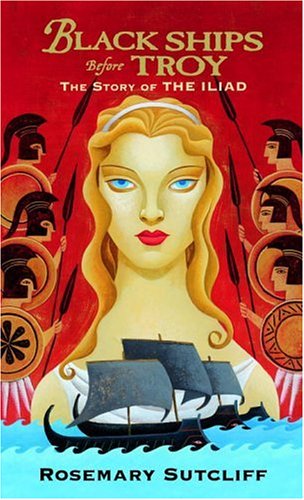 One would be hard-pressed to argue against the powerful story of The Illiad, but I am having a difficult time thinking through my thoughts about Black Ships Before Troy by Rosemary Sutcliff. The trouble is not the story, but the text. I picked up this retelling of The Illiad because our state of Massachusetts Department of Education has listed it as a model reading text for sixth graders, and Black Ships Before Troy is the focus of one of the state’s exemplary Model Curriculum Lesson Units as part of our Common Core Initiative. (I am still trying to get my hands on the unit itself. We are not a Race to the Top school, and only Race to the Top schools have access to all the model units. I have no idea why.)

Which means the state would really like all sixth graders to read this book. I suppose some state folks might argue differently about my view on that — that this book is merely one example, and all that, but who’s kidding who? They don’t spent a year or more working on a model unit just for the fun of it.

Me? I had trouble getting through the book. Again, it’s not the story (although how much killing and battle can one read about before getting glazed eyes). It is the writing in this book. At least, that’s my humble opinion. Sutcliff’s text would go right over the heads of most of my sixth graders, and I can tell you quite honestly that I would probably lose them in the first chapter. With numerous characters and countless Gods, and with the story shifting between the heroes of Greece and the heroes of Troy, I could barely keep track of who is who, and I know the story already pretty well.

No doubt, the inclusion of this text is a sign of the “complex texts” element of the Common Core, and the drawing of connections between literacy and Social Studies. I get it. But I wonder if the folks who worked on this unit, and the folks at the Department of Education, thought deeply enough about something more than reading when choosing books (although, a quick look at the Lexile site shows that Black Ships, with a level of 1300, is clearly a high school text Or am I reading that wrong?).  If we lose our students in a book early, it is painfully difficult to get them back. I know this from experience.

And it’s not just Black Ships Before Troy, either.

I notice that Tuck Everlasting, which is a beautifully-written novel with some huge themes, has been set up as a text for fourth grade. Fourth grade? I teach this book in sixth grade, and there are many students who struggle with the issues raised in the novel, as well as the way that Natalie Babbitt uses her poetic skills to tell her story and set the scene. It’s a perfect text for 12 year olds. But 9 year olds? I don’t think so. (although Lexile does think so, as its 770 designation puts it in the fourth grade category).

There’s an issue of the Common Core. And there’s the issue of Common Sense. In this case, the two ideas are not meshing. And that is frustrating to me, as the teacher who wants to instill a love of reading and books in my students.