Our sixth graders recently finished up a Peace Poster project with our fantastic art teacher, and now the posters are all over the school. It’s such a great way to infuse art with a social message, and get young minds thinking of the world in global terms.
Here is a collection of some of the posters:

I’ve become a big fan of Stephen McCranie’s Mal and Chad series of books ever since he skyped into my classroom and taught my students about drawing and storytelling. So, I am biased with this review. But even if I had not had the pleasure of Stephen’s company, I would be a fan of Mal and Chad. The books (three, so far, I believe) center on a boy, Mal, and his dog, Chad, through adventures and misadventures as Mal uses his technology skills and navigates the awkward stages of friendship with a girl, Megan.

There’s plenty of humor built into the stories — visual and textual — and the books are accessible and relate-able to elementary and middle school kids (and I suspect a few high school students wouldn’t mind picking it up). The artwork has a Manga-feel to it and McCranie conveys a lot through the expressions of his characters. Some of the “silent” panels pack the most powerful emotional punches, particularly as Mal gets shunned by other kids in his school. That’s a credit to McCranie’s art skills and understanding of graphic stories.

What sets Mal and Chad apart, though, is its heart.

The center of all the stories — including this one, Belly Flop — is Mal’s desire for good friendship and his willingness to do what it takes to become a true friend.  His intentions are always right on, even if the results almost always end up in slapstick comedy. He wears his emotions on his sleeve, and we the readers are right there with him. I’m always amused when Chad, the dog, kicks in with some dialogue, particularly when he is puffing up Mal with positive comments. Chad is Mal’s one-dog cheering section, and yet, it never falls into the cloyingly annoying phase, as it could. It’s genuine (well, as genuine as it gets with a talking dog.)

Belly Flop centers on a few storylines that come together, as Mal invents a Weather Cube that goes awry. Meanwhile, he gets invited to Megan’s birthday party, where some powerful glue on a gift undoes all of Mal’s ideas for impressing Megan and he ends up belly-flopping into a stream (thus, the nickname kids give Mal and the name of the book). So, he tries out for the Talent Show, only to have the audition fall apart when the Weather Cube goes crazy and unleashes a powerful storm. Mal races out to find Chad, to make sure his dog is safe, and finds himself in danger. Only Megan can save Mal … and she does.

See? Heart. That’s what storytelling is all about, and Mal and Chad is full of heart.

Peace (in the tale),
Kevin
PS — the trailer

I had the pleasure to take part in a conversation the other night about gaming and teens as part of the Learning Aloud series from Connected Learning TV. The series puts the narrative into the hands of students sharing out their expertise with the world. I was invited as a sort of “token teacher” who teaches video game design, as a high school student from Chicago (the very articulate John) and the librarian who founded The Library of Games in the Chicago Public Library (Taylor Bayliss) talked about how a group of teens come together to discuss and create podcasts about video gaming.

It was a great show, with lots to think about. I brought in some views around gender, about making the switch from consumers of games to creators of games, about the need for teachers to open up the classrooms to more of students’ interests, and concerns about how to reach a broader audience than just an after-school program.

You can also listen to some of the Library of Games podcasts at Soundcloud.

The past few days, for morning work, I have had my students coloring. I made it a sort of mystery about why we were doing coloring instead of our usual morning work routines (critical thinking puzzles, math and writing work, etc.). Yesterday, I brought my iPad into the classroom and hooked it up to the Interactive Board, called up my ColAR app (free, with some premium features) and asked kids to bring their colored pages up to me.

I then pointed the iPad to their pictures … and the oohs and ahhs began.

The app brings to life the colored pages, and it led us to talk about the wave of Augmented Reality apps that are now coming out, and what AR even is (most had never heard of the phrase before). They were really jazzed about the app, and I suspect more than a few dashed home to download it.

I still want to find a way to hack the coloring pages to make them my own. But I haven’t yet had a chance to experiment with it.

Peace (in the AR),
Kevin

This week, I decided to capture my day as in comic strip form. The small space made me focus!

Tonight, I am a guest on a Learning Aloud program with some high school students who are going to be talking about video gaming. The Learning Aloud series is youth-centered sharing and is part of the Connected Learning movement. You can listen in and join with the chat. The show begins at 5:30 p.m. (eastern time). A focus of the show is something known as the Library of Games in Chicago. It seems like a great idea.

Library of Games (LoG) is a video game journalism program sponsored by YOUmedia Chicago at the Chicago Public Library. LoG is open to all high school students who love video games and want to learn more about games, gaming criticism and journalism. Students in LoG produce a weekly video game podcast and produce all of the content on the LoG blog including articles, editorials, videos, graphic design and more.

We believe that video games are an incredibly important part of people’s lives, especially teenagers, and we need an open and intelligent forum to discuss games. We want to represent the diversity of teen gamers and prove that teens can speak and write intelligently about video games. — from http://libraryofgames.org/

Writing is a central feature of our science-based video game design project, and we come at it from a few different angles. One is the pre-planning and storyboarding that has to take place before they can begin building the game. The storyboards offer students a chance to articulate the vision of the game but also a way for us to chat about what they envision doing, the potential roadblocks, and a path forward.

Here are a few storyboard scenes: My latest blog post for MiddleWeb is all about the #nerdlution movement through the lens of community and connections. Come read what I wrote.

Peace (in the reflective stance),
Kevin 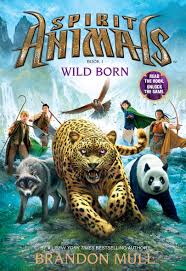 Scholastic is making another push into what appears to be a lengthy book series, and I feel mixed about it. Spirit Animals begins with this first book, Wild Born. Here, there is the story of 12-year-old kids connecting with mythical animals that arrive during a special celebration and then the four set off on an adventure to save their world from evil forces brewing all around them. Sure, we’ve read this tale before. Many times. I’m not complaining, but I have to admit that my son liked this one better than I did, as we did it as a read-aloud together. I did enjoys the cover of the book. It’s very attractive and eye-catching. And I appreciated that writer Brandon Mull added complexities here and there in the plot and character development, such as competing storylines so that you are never quite certain which group is the real bad side.

But I can’t escape the feeling that there’s a marketing genius at work, though. I mean, you can’t go wrong with connecting animals with young heroes when it comes to young readers. Everyone loves powerful animals. And that’s what rubs me the wrong way with Spirit Animals. It feels like marketing more than storytelling.

I felt the same way about Scholastic’s 39 Clues series, although my older son loved those books and read them as they came out. Maybe it’s just me and a natural apprehension when a big company enters the room. Like 39 Clues, the Spirit Animals series has a web-based platform for students to “play the game” as they “read the book.” I let my son go to the site and set up an account, but looking over his shoulder from time to time, I can’t say that I was all that impressed with what I saw. He lost interest after about 15 minutes. Yet I don’t think he every got to the Quest part of the site, so maybe we didn’t fully experience the “play the game” element.

I remember sitting in a conference session at NCTE last year, where “transmedia books” was the topic, as represented by some publishing companies, including Scholastic. But I had to walk out midway through the presentation because their vision of “transmedia” was setting up a companion website for kids to “play” with the story and characters but it was clear that what they really meant was to “sell” more books in a series. Now, listen, I know publishers are in the business of selling books but I feel odd when kids are targeted through games and online portal spaces that are branded with by a company. Maybe I am being too critical of Scholastic here. I know they are trying to navigate the changes in the way kids read. I just feel a little put off by it all.

I am honored to have been nominated for some Edublog Award categories this year. If you have the inclination and time, I’d appreciate support. Just being part of the crowd of blogs and folks in these spaces is enough for me, though. Like many of my colleagues, I don’t blog for awards. I blog to reflect and understand and to share, and connect.