This student of mine has been deep into our game design unit. I think Gamestar Mechanic might soon to be limiting for him but he has enjoyed learning and playing with games, and this version of his science-based video game project shows a lot of good thinking, planning and game design. (If you are viewing this post on a mobile device, it might not embed.) As part of our game design unit, my students explored games they liked to play and then reviewed them through a critical lens of a game designer. I’m going to be sharing out a few podcasts that my students did around their reviews, giving voice to them as players and creators.

First up is Ryan’s review of Super Mario Bros.

This is a book that my older boys were fighting over to read when I took it out of the box, and then I had trouble getting it back from them to read myself. Visual artist Tim Leong, from Wired, has put together a fascinating look at the Comic Book Universes (in all their brands and trajectories and offshoots) in a series of infographics that will blow you away with the detail, humor and design. As an example of how to represent information in a graphical format, Super Graphic is an exemplar text.

Not everything in here is child-friendly, just as in comics, but there are enough cool infographics that you could pull out (well, photocopy, in color) to share as how to hone your interest in a topic and share out your knowledge in interesting ways. Super Graphic is a wonderful ode to comics and visual design.

No wonder my kids were fighting over it. Super Dad always wins, though!

Peace (in the panels)
Kevin

I’m a sucker for ideas, particularly ones that seek connections between people and their lives and technology. So consider me intrigued by a project by friends Ian o’Bryne and Greg McVerry (and a few others) called #Walkmyworld, where, as they describe it:

This is part of an ongoing, multi-year venture Ian, Greg and others have been working on, and sharing out at NCTE each year, around digital media and writing. Poetry is often at the heart of it, and Ian writes in his post that he anticipates a shift towards poetry in Walk My World at some point.

I’m still trying to think how I might get my students documenting their world, but this morning, I opened up Vine and shot this very humdrum video of what I do (after I walk the dog) — which is get my java and get writing. I wanted to keep the coffee mug front and center each time, as the frame for the video (and well, my morning).

I have an app called Fragment that does all sorts of odd things to photographs. I used it this week for two Daily Create assignments over at DS106. The first was to “app up” a silhouette, but I abandoned the shadow idea in order to play around with the “app up” part of things. I took a shot of some art on our walls and created this:

Then, yesterday, the call was for a Cubomania Self Portrait. Alan Levine reflects on how he did his here (using Big Huge Labs). But I realized that I could use Fragment again for mine.

It’s intriguing to play around with composing with images.

Peace (in the camera’s eye),
Kevin

Yesterday, I received this in the mail (and recorded it in Vine):

It is from my friends Franki and Mary Lee over at A Year of Reading. It’s actually been eight years of reading/sharing for them, and as a celebration, they are planning to spend each month donating to charity in the name of a blogging friend. It turns out that I was the first on their list (humbled and honored), and they donated to a group known as Birthday Wishes, which helps ease the lives of homeless children.

Thank you, Franki and Mary Lee. It’s a pleasure to be in your community and network and more. And such projects remind me of the human interaction behind the digital conversations, too. While I have met both Franki and Mary Lee (at various conferences, including their own Dublin Literacy Conference), most of our time “talking” is online at our blogs and at Twitter. But friendship blooms in all sorts of places.

It’s a frigid day outside (hello, Polar Vortex) but there is some warmth in here. 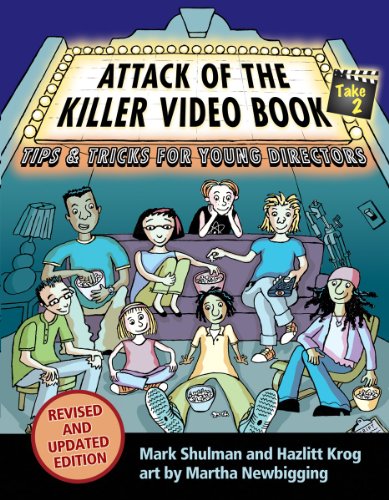 How’s that for a title, eh? Attack of the Killer Video Book. Along with a new video camera under our Christmas tree, my younget son received this fantastic book resource on how to make movies on the cheap. Written by Mark Shulman and Hazlitt Krog, with great illustrations from Martha Newbigging, this book is a perfect fit for any 9-year-old filmmaker. (I have the revised edition — Take 2 — but I am not sure what has been revised from the first edition.)

Told with a sense of humor and various illustrations and diagrams and cartoons, this book really gets at the heart of shooting a movie, from the initial storytelling, planning, technical aspects of setting up the camera and microphones, right through to editing software on the computer and publishing, and kicking back to enjoy the fruits of the labor. Plus, the book reminds you to bring along snacks for any friends who join you in making the movie. Snacks are important.

The writers even provide a sample script at the end of the book, as both a model and inspiration. I was very happy to see how much time is spent on the “good story” aspect of the moviemaking, which can be the most difficult element. For many young people, the whiz and bang of the shooting of video (bloopers anyone?) overtakes the desire to spend time on a good story to tell, but here, the writers push home the idea that a good story is at the heart of every good movie.

This book would be a good addition to any classroom, as I suspect there are budding filmmakers in our rooms, probably even students we would never suspect of it. I wrote over at by blog over at Middleweb about why we were doing programming and coding in our writing class. What do you think of my justification?

Read Why We’re Learning about Coding in Writing Class

I’m enjoying the curation of some Flipboard Magazines (as I wrote about the other day) and I have since added two more along lines of my own interest.

And the other two magazines I already shared out about:

If any of those are of interest, feel free to subscribe.

Peace (in the flip),
Kevin

Andy Greenberg’s This Machine Kills Secrets: Julian Assange, The Cypherpunks and Their Fight to Empower Whistleblowers is a fascinating look behind the headlines of Wikileaks and even the impact of Edward Snowden and Bradley Manning to show the movement to provide safe, secure and anonymous means for leaking secrets to the world. The quote above is from one of the manifestos from a group of hackers who want to change the world through the release of information. Known as cypherpunks, they believe that creating systems for whistleblowers will make politicians more honest, and make the world a better place.

The history of the cypherpunk movement is a fascinating story, as Greenberg toggles his tales between characters and events, including the parallels between The Pentagon Papers (which kickstarted the whole “information should be free” ideals, really) of the Vietnam War and Bradley Manning’s securing and releasing government documents via Wikileaks. For Manning, it was not much more difficult than downloading files to a flashdrive. Amazing, really.

“Cypherpunks write code” means that political action is in the doing and the deeds, not just in the lobbying for more openness and protesting for change. Much of the book ends up focusing on Wikileaks (and very little about Snowden, as his case catapulted into the headlines after the book was written, and Greenberg mentions him only briefly in an update at the end of the paperback book) and the technical prowess and push going on behind the scenes to create online, technical spaces for secrets to be submitted, vetted and revealed.

I’m not sure yet about how I feel about all this.

On one hand, I see the value of shining light into the darkness of politics (I am a former journalist, after all). On the other, the line between openness and putting people’s lives in danger is a difficult one to discern (as Greenberg expertly points out throughout the book), and the anarchy element of some of the cypherpunk movement makes it difficult to know motives. My basic belief is that our elected officials need to be held accountable for their actions and books like this one show the efforts of many to do that.

Whether you believe Assange (of Wikileads) to be a hero or a villain (and that may go beyond the politics of Wikileaks and into the realm of legal charges against him right now for actions against women), Greenberg’s point — and others, too — is that the idea of leaking information is now part of our modern culture, and the cork can’t be put back into the bottle.  Too many people have access to too many files in digital formats. More leaks are bound to happen. The only question is: what kind of information will come out next and who will release it and why? Time will only tell.

Peace (beyond the veil),
Kevin

Page 5 of 6123456
Thank you for visiting this online writing home. I am a sixth grade teacher and a co-director of the Western Massachusetts Writing Project. This blog covers a lot of ground -- from teaching, to writing, to music, to art and beyond.