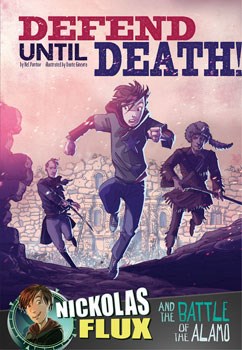 Here’s one of the better character names that I have come across in some time: Nickolas Flux. Isn’t that a cool name? He’s the young hero of a series of new graphic novels from Capstone Press that ties into history. Nickolas is a kid who has an odd ability to suddenly, and unexpectedly, get zapped into the past (it has to do with a science experiment gone awry), right at the juncture of major events in history. He also gets zapped back into the present before any danger happens to him. Convenient, right?

Defend Until Death tells the story of the Battle of the Alamo, and I want to give kudos to the writer and publisher for giving young readers both sides of the story. Nickolas (zapped from the stands of a high school football game) first finds himself in the ranks of the Mexican Army, with General Santa Anna, as they march into Texas to reclaim lands stolen from them. The start of the story is sympathetic to the march towards the Alamo.

At least, for a few pages.

Then, Nickolas is in the Alamo itself, hanging out with Jim Bowie and Davy Crockett, and the story’s perspective turns very pro-American, as the fort is overrun and the defenders perish as Santa Anna’s forces overwhelm the outnumbered Texans. Nickolas gets to back to his football game just as the fort falls and Bowie is about to die.

The story, aimed at elementary students, has a quick pace to it, and multiple historical perspectives, and there are small text boxes on the bottom of many pages that gives interesting historical tidbits about the scenes played out on the pages. Also, as with most of these Capstone books, a section at the end gives even more historical details about the theme of the story, so here, we learn more about the Alamo and the fate of the Mexican-Texas-United States dispute.

Peace (in the fight),
Kevin