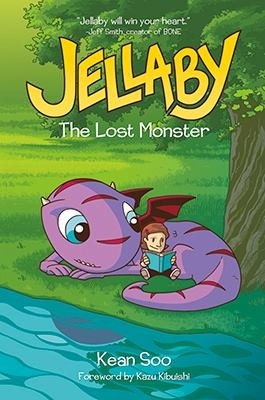 There is no way you could not fall in love with Jellaby. Not just the graphic novel of the same title, but the monster/creature/alien/thing that forms the heart of this new graphic novel series by Kean Soo (with a great introduction by Kazu Kibuishi).  Jellaby centers on a young girl, Portia, whose a bit lost and lonely in a new place and who discovers in the woods near her house an oversized, yet clearly young, creature that is also lost and lonely. She names the creature Jellaby, and Soo’s artistry really brings Jellaby to life with huge eyes, small wings and a large heart.

The story is a riff on the “Can I have this dog that followed me home – please please please?” idea but Soo has created a real believable world with Portia and Jellaby and then later, her new friend, Jason. The two kids are on a quest to find a portal back to Jellaby’s home, and the perfect cover for transporting a monster on a train is Halloween. This graphic novel — subtitled “The Lost Monster” — is the first part of a larger story of the three friends (and I’ve seen some of Soo’s work in the Flight collections so I know he has a flair for storytelling with heart).

You know what I appreciated?

At the end of the novel, Soo writes a bit about where the story comes from and explains some of the artistic elements. For example, the book is completely dipped in purples and pinks. As I was reading, I thought: that’s a pretty clever way to establish the mood of the story, and it does. Our visual senses see the world of Jellaby through the colors that Soo uses. I was thinking, how smart. But it turns out Soo used that colors because it was cheap, and he had figured that when/if the book ever got published, the publishers could easily turn the purple to black. But the publisher liked the purple and pink hues, and so it was kept. Interesting.