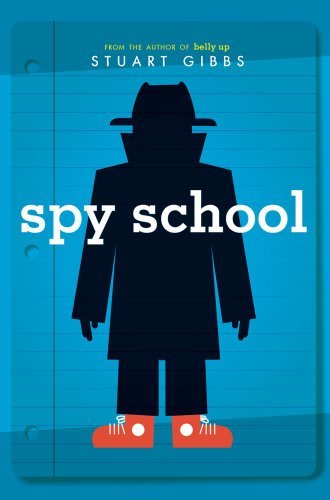 A few years ago, after reading some Carl Hiaasen with my class, I saw the book Belly Up by Stuart Gibbs in the book store. The cover had the same sort of style as Flush and so I picked it up. It was a fun read, certainly influenced by Hiaasen’s style of humorous writing and focus on hijinks and the environment, albeit with the setting of a zoo, of sorts. Still, it was a fun, fast read, with lots of chuckling on our part. I guess some students liked it too because Belly Up went missing from my classroom library not long after I put it there.

So, when I saw that Gibbs had another book out (and a sequel), I kept it on my radar. Finally, my son and I dove into Spy School as a read-aloud and as soon as it was done, we were searching for Spy Camp. My son is nine years old, so spying as the source for stories has great appeal (that Gibbs, he knows his audience). The novel tells the story of Ben, who gets invited to join a super-elite school for young spies-in-training, only to find out things are not what they appear to be and suddenly, the hunt is on for a mole in the espionage establishment.

There’s plenty of action, and pretty decent characters, as Gibbs establishes some of the ins and outs of the spy agencies, and puts Ben’s life in danger more than a few times. Luckily, Ben has a protector of sorts in Erica, a beautiful girl whose espionage skills would rattle James Bond on a good day. She’s a one-person wrecking crew of smarts and skills. And Ben is smitten (my son wasn’t all that interested in that element of the story).

Spy School is a good, adventurous read for middle school kids, particularly boys. Gibbs has found a solid topic to build some novels off, and my son and I are going deep undercover … to read.

Peace (this blog post will self-destruct in five seconds),
Kevin