Yesterday, I found my writing brain toggling between a new poetry writing event with the #walkmyworld project and thinking about Slice of Life, so just like that famous commercial where my peanut butter met your chocolate, I realize that today’s post is bit about both.

For #walkmyworld, the latest event idea is to write and share a Twitter-friendly poem about place. Greg and Ian suggest Haiku as one form whose brevity fits in nicely. Before school, as I was sitting on the couch with my youngest son, reading, we looked out the window. A little bird flew in and on the single branch of a bush right outside our window, it just balanced there, looking in as we were looking out.

That’s a haiku moment, if ever there was one, and I wrote it on the drive into school (repeating it over and over in hopes I would not forget the rhythm). I then used Vocaroo to record a quick podcast and then shared the poem on Twitter with the #walkmyworld hashtag. Then, later in the day, I saw someone was using Haiku Deck for sharing out some poems, and I thought: of course.

This morning, I moved the poem into Haiku Deck to make the piece more visual.

Last night, I started to think of another poem, and how to visually represent it. Night was falling and the white snow was fading away. The stars were already coming out, and yes, it is bitterly cold here in New England (although, thankfully, we were spared the latest storm in my neck of the woods). The poem that emerged tried to capture that, and then I used an app that I have to create this visual poetic collage: 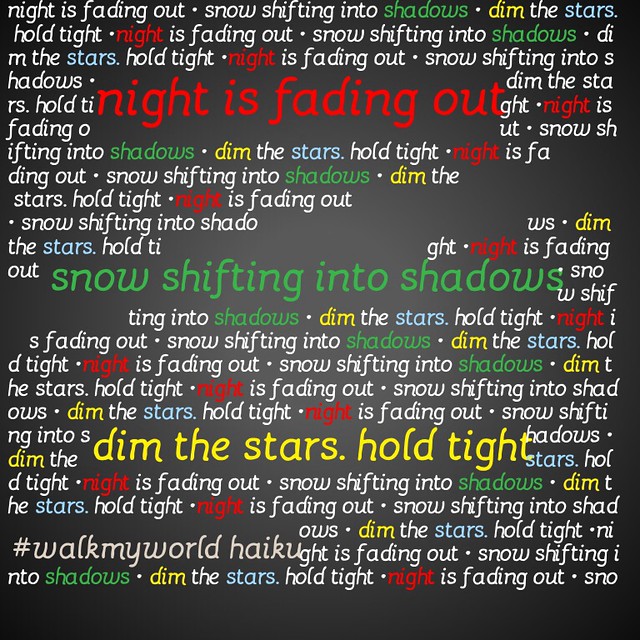