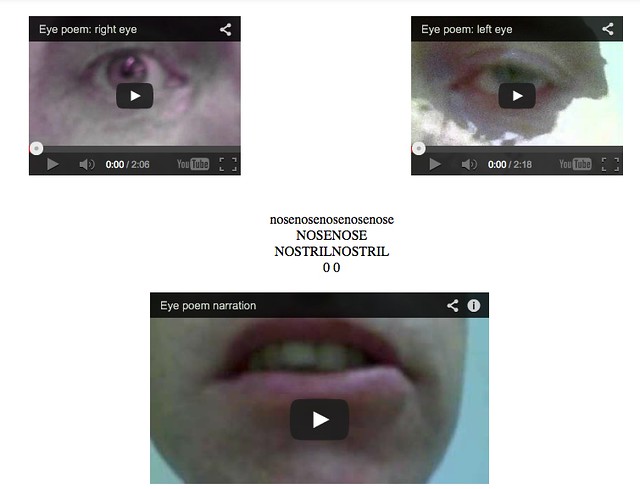 There’s no easy way to describe this old project (which can now be found housed on a Webmaker Thimble Page). It is  my first real venture into multimodal composition. I had just bought a Flip Camera, which no one had ever seen before, and had this idea for a poem that used three different videos, merging into one experience, so I asked some NWP friends at a Tech Matters retreat in Chico to blink into my camera and repeat the words “blink blink blink” for me. They no doubt thought I was crazy and could not figure out what I was doing, and I could not explain it, either. I taught myself some basic html coding and worked to bring it together.

I’ve hosted the poem itself in a few places over the years, often stifled and frustrated by the limitation of web hosting spaces that would not allow three videos to run simultaneously, as is required with this poem. The idea is that you click “play” on all three videos, and then center your own eyes on the nose. This allows you to experience ‘the face’ of the poem. (I know, it still sounds crazy). I included the text of the poem and also recorded a reflection on the process of writing and making the poem (which was interesting to listen to this morning … eight years later).

If you click on the screenshot above, it will bring you to the poem itself. (The sound quality sucks because it was a first generation Flip and the microphone must have been little more than a tin cup with a string.)

Confused? That’s OK. It was an experiment. I still find it intriguing and came back on it this morning for a blog post I am writing for the National Writing Project. It then occurred to me that Thimble might be the right place to host the poem, and it worked!  I did a little cheer.

I’m still tinkering a bit with the html code but not too much. I like the idea of preserving it as much its original form as possible.