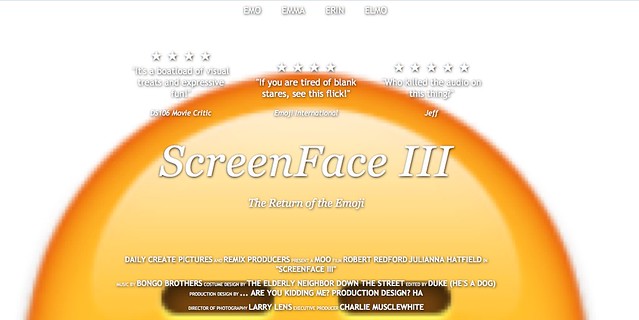 Yesterday’s Daily Create was to create an emoji movie poster. I suppose this could have gone a few ways: we could have made a poster for a movie told entirely in emoji (which I don’t think anyone did) or we could made a poster for an emoji movie (which is what I did). There are probably other options, too, but that’s the beauty of the Daily Create.

I went into Webmaker Thimble, using a Movie Poster template that walks you through all of the steps, and remixed it for a fake movie: Screenface III. What’s funny is that the emoji I used got blown up (not literally) so large that you can only see the top of its head, with odd eyes on the horizon of the page. I tried to fix it and then realized: it works better this way. Or  maybe I just got lazy and realized: good enough.

Peace (in the theater),
Kevin