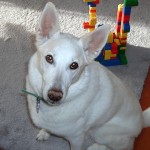 The other day, a friend on Twitter posed the question of where my moniker, Dogtrax, came from. Actually, Maha Bali was riffing on the fact that Alan Levine, whose work with #ds106 is crazy fun, and I both have dog-related nicknames (he is Cogdog and I am Dogtrax). She wondered if we had some connections to each other (we don’t, other than #ds106) and what the story was.

I played it for humor, as if I were trying not to give away some grand secret. But then Alan shared out one of his very first blog posts, in which he explained where Cogdog came from. That made me feel as if my diversions to Maha’s questions weren’t warranted, so I told her I would search my blog for a post in which I explain my name.

I guess I never wrote it, so here it is.

Where Dogtrax Came From

The nickname Dogtrax is a variation of a nickname I had a child. I grew up in an apartment complex with lots of kids, and we would gather to play sports most afternoons and most weekends in the grassy field near the side of the apartment building. Baseball in spring; soccer in the fall; and football (American football) right into the cold months of winter. We had a whole range of ages, so little kids would be in the huddle with older ones, and usually, someone went home hurt during the games. It was just the way of the world.

A good friend of mine was a star athlete and he excelled in neighborhood football. Me? Not so much. But I was big for my age, so I could block whenever my quarterback friend wanted to run down the field. I should mention here that I have/had red hair (“had” being the fact of life of getting older), and there is a football play called Red Dog, which my friend liked to call when he wanted to run for a touchdown with me blocking in front of him.

Thus, my nickname for a long stretch of time as a kid in our neighborhood was Red Dog. Interestingly, nobody outside of our block called me that. It was a real name connection to where I lived at the time.

Cut to college, where my drinking buddies and I were talking about childhood memories and nicknames, and I told the story above of the football field, so my friends in college began to call me Red Dog again, and then they later dropped the Red to leave just the Dog (a word which later became pop culture slang for friend, as in Dawg. We take no credit for that. Just saying.)

Which leads us to Dogtrax. Its origins are in my very first email address I ever created — too many years ago to now even count — and a little music machine. Around the same time as I was discovering email (this must be the early 1990s), I was using a Tascam four-track recorder to record and produce some original music, and in the vein of feeling “professional,” if only for myself, I took to labeling my tapes (hand-delivered to friends) as being created by Dogtrax Productions (the trax being in reference to “tracks” of music. X sounded cool, but now it is overused, right?)

When I needed to create an email username, I went with Dogtrax@xxxx, and I have stuck with it ever since as I have moved email hosts and moved into Twitter, etc. I don’t really think about it much until someone like Maha asks me or someone at a conference says “Oh, you’re Dogtrax.” Actually, that makes me feel sort of foolish in the moment. “Eh, yes, but I am Kevin.”

Even as the world has shifted more towards open names in webspaces, I still fall back on my Dogtrax moniker, as sort of a touchstone of childhood and young adult memories, and a bit of a veil of identity, too (now completely gone as I write this). The name has guided my avatar creation over the years, too, to some degree (see an earlier post here about my shifting avatars). I realize, as I write this, that Dogtrax is my anchor in shifting spaces, an identity that has stayed constant over the years as my presence in different networks and communities has come and gone.

It’s interesting, too, that the Internet world is overrun with LOL Cats, and us dog-related identity folks (like Alan and I) often find humorous ways to push back against the feline presences in our feeds. When we wag our tails, it means we’re happy, by the way.

And that is the origin story of Dogtrax. 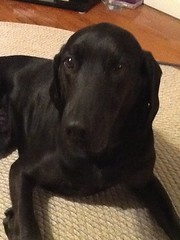