Here is an example of a “movie trailer” media project for a short story project my students are working on to end the year. The premise is that someone famous is stuck inside a game (board game, video game, whatever) and the narrator of the story has to get that person out. Students will be creating “media companion” pieces to the short stories, and they have choice on what they want to do.

One option is a “movie trailer” for the story, using digital storytelling. So, I created this one for my own story about rescuing King Arthur, who is stuck inside the game of Risk.

I used a free app called Adobe Voice on my iPad to create a trailer for my story, Risking It All for the King. We don’t have iPads in our classroom, so some may use iMovie, or work on other things.

You can read my story, too, if you are interested.

Peace (in the trailer),
Kevin 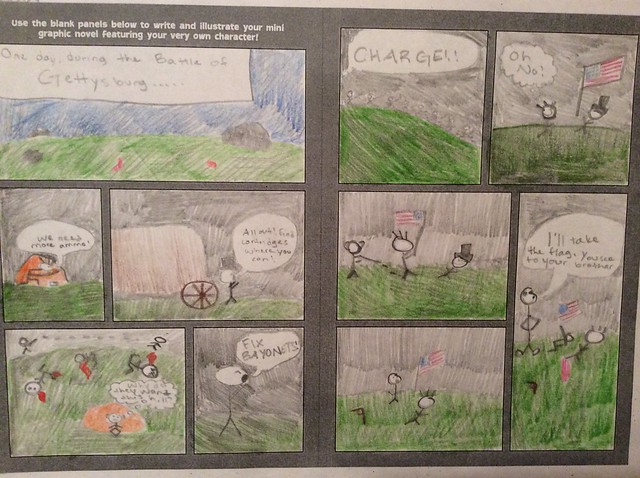 I’m writing more about a project in which my class constructed a graphic novel version of a novel we are just finishing reading. This page really blew me away with the sense of artwork. So, I am sharing it out, with little context. (More to come later …)

PS — Bonus points if you can figure out the book …

Here is yet another canon shot against that Native/Immigrant divide that we sometimes refer to … which does not exist with such clarity as one might be believe, so how about we stop using these terms? Agreed?

My friend, Bill Ferriter, wrote a post about this, too, focusing on how teachers are often called Digital Immigrants, as if they can’t find the power button on a computer or something.
Reading Bill’s post led to me make these two comics: 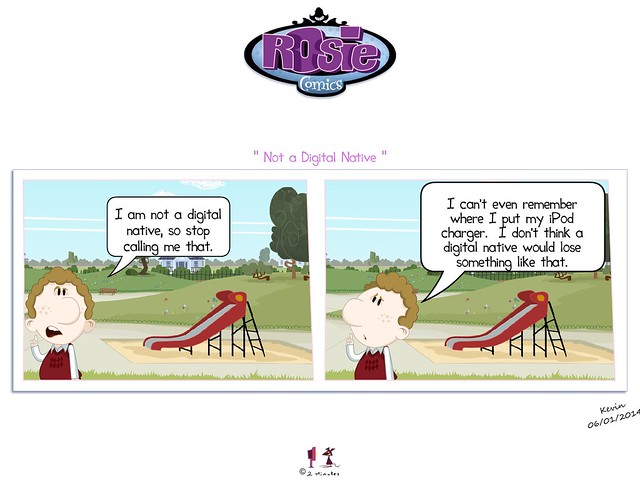 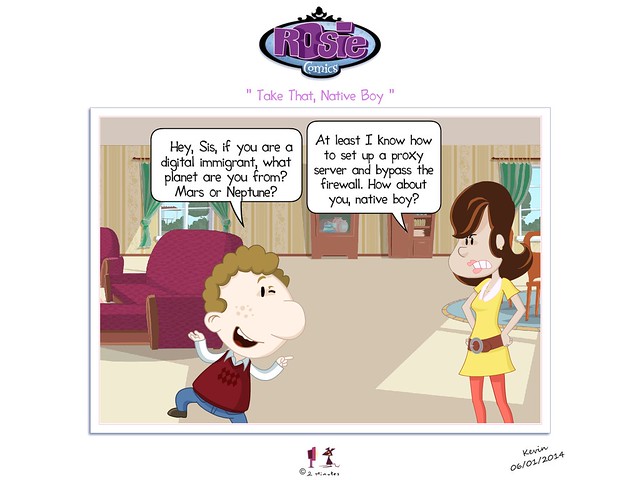 You know how, every now and then, you realize that kids have been talking about something you think you know about — usually from making some assumptions of context of their speech– and then a kernel of information floats by, and you realize, Oh, THAT’s what they are talking about!

This week, I learned about Slender Man. But it turns out, references to Slender Man have been in the air all year, particularly when my sixth graders have used our BitStrip Webcomic site. A few students have created faceless characters, called them some version of Slender Man, and I just assumed they were tinkering with the avatar creator’s advanced tools, and that the name described the characters they had created (no eyes, long face, long thin body). One student even wrote his expository writing piece around how to make a Slender Man in Bitstrips, and demonstrated how to create the character in front of the class.

I thought it was odd, but I honestly didn’t think much more of it.

What I didn’t realize is that Slender Man is one of those cultural touchstones of youth — a meme gone viral whose origins are a bit murky but whose presence in fan fiction and app games and other elements of social media.  Slender Man is a mysterious figure that spooks and stalks children. Me? I was clueless about Slender Man, until I opened up my New York Times yesterday and read a piece about two girls who killed another as a way to prove themselves worth to a Slender Man they imagined was real and lurking in the shadows of their lives. Or something like that.

So, realizing the connection to the expository piece from a few days earlier, I turned to my 13 year old son, and asked, “Who’s Slender Man?” and got a full overview of Slender Man’s origins that matched pretty closely to some research I did online later on in the night. Know Your Meme has a good overview of the Slender Man story. When he asked why I was asking, and I told him about the story of the girls, he shook his head, and said,” That’s tragically stupid.”

Uncovering Slender Man is another reminder that cultural information often flows beneath the surface of our lives, as teachers and as parents. You don’t know what you don’t know until you find out what you didn’t know. Now I know Slender Man, but what else don’t I know?

Peace (in the information),
Kevin

My youngest son has suddenly sparked an interest in Pokemon cards. I don’t pretend to know the ins and outs of Pokemon cards and games, and worlds, and accept that this Pokemon universe is a kid’s world of knowledge. I’m Ok with that.

But I would love to steer him to make his own cards, and I remembered a site that Chad Sansing had shared with me a long time ago that allows you to do just that: make your own cards, online. The site was shared by someone else on Twitter this week, and I suddenly remembered Chad’s idea from last summer.

So, I’ve been tinkering with the site, and it works OK. The trickiest part has been getting the image the right size so that it isn’t completely smooshed and flattened in the card. I’m still working on that. But my son (he’s away this weekend) will be thrilled by this activity. You can download the cards as image files, or share/publish them at the site.

Here’s one I made, using an art app on the Ipad. I was going for a saxophone-themed creature. 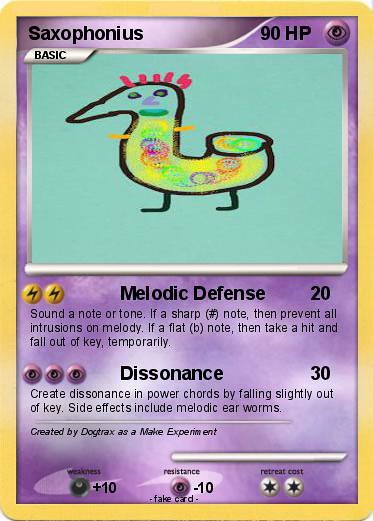 Here’s another I made for my friend, Terry, using Bitstrips to create an avatar of him as Captain Zeega. 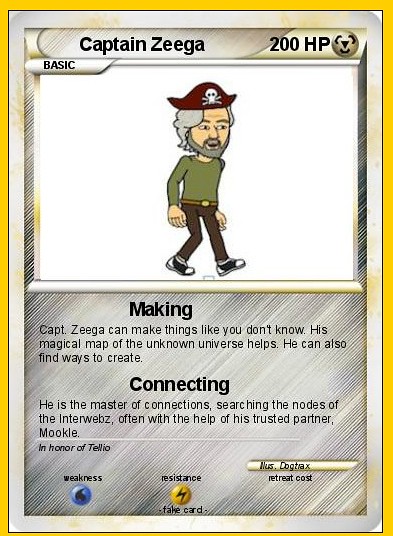 Pretty nifty, even if I have no idea of the different powers and rules of the Pokemon universe. 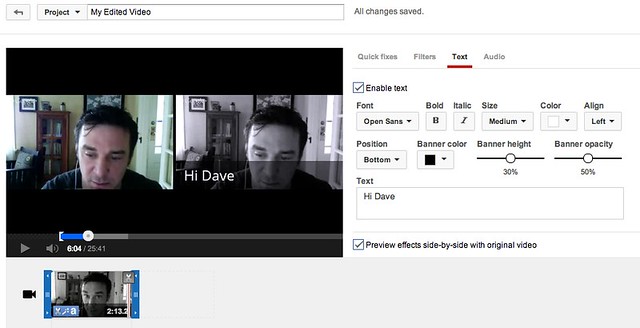 I was watching a video interview with Dave Cormier, whose work around open learning is so thoughtful and interesting (and whose Rhizomatic Learning course was a fantastic learning adventure earlier this year), when I got distracted by a “remix this video” button.

Of course, I clicked the button.

And I got pulled into the YouTube video remixer/editing tool, which allows you to do a few things with online videos (but folks who put up videos have to allow it in their settings). You can splice the video, add text, change transitions, insert audio, and more. It’s interesting and I need to spend more time, but I had fun adding some words on top of Dave as he was being interviewed.

I’ve used the tool a bit before, but it has been some time since I’ve gotten back to it, and it has been improved. I love the remix element of it, too, and wonder how far it can be pushed.

I’ve been experimenting with a site called Fold That Story, which allows you to collaborate on a story, one small piece at a time (without knowing the pieces written prior to the one before you, so the writer is always in the dark about where things really began). So far, so good, and I may tinker with it with my sixth graders here at the end of the year, particularly with the option of allowing them to create their own stories.

Here are the results of two folded stories that I set in motion with teachers in our iAnthology writing space. 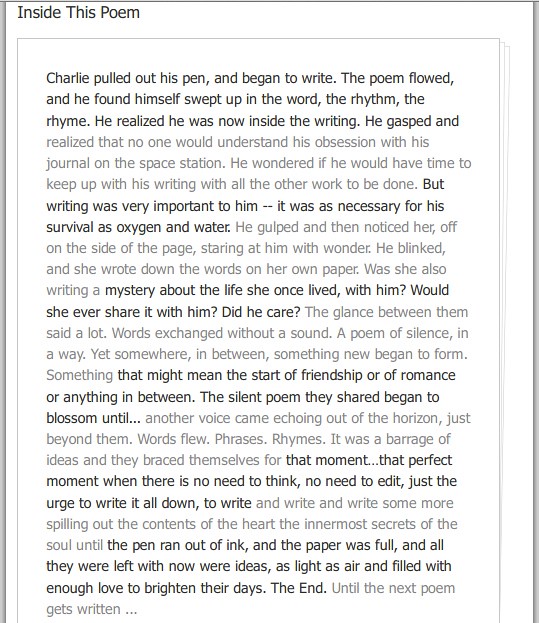 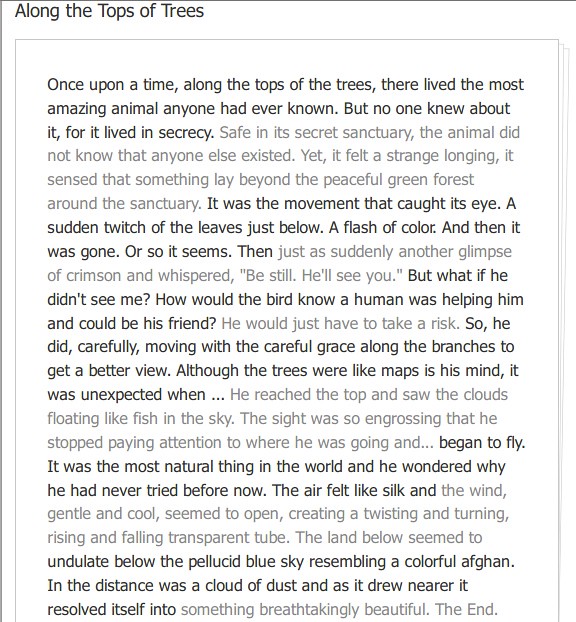 Peace (in the fold),
Kevin

As we gear up for the Making Learning Connected MOOC (#CLMOOC), I am dipping into another endeavor underway called 5 Habits of Highly Creative Teachers, and as part of those freeranging discussions, I went into Adobe Voice and created this short piece. It echoes something that my friend, Terry, often said last year, as the first #CLMOOC was about to launch: Make Something. Every Day. (or something close to that!) My latest blog post at MiddleWeb is about being tired, and a bit worn out, from the school year. What keeps me going some days? Poetry, and the new collection — Teaching with Heart — is a perfect companion to the long days that mark the end of the school year (we still have two and half weeks to go).

Come read my post and add a poem that keeps you going.

Peace (in the daze),
Kevin

(This is part of a series of posts about releasing some early music via Bandcamp.)

Our drummer, Bob, loves to play music, and he would love to write songs. So, he often sends out reams of lyrics (he’s the king of the double entendre) with hopes that one of us will work some of it into a song. This one — Flicking the Switch — began with a few verses from Bob, as I was working on a funk song for the band (Sofa Kings). In the end, about half the words are Bob’s and half are mine. It’s a love/lust song in which the relationship is clearly heading south, and the narrator is pleading for another chance. (He’s not going to get it.)

Our keyboard player, John, is the lead singer, and I was able to layer in some saxophone in the studio (I used a tenor and soprano) to create a pseudo horn section. Live, this song was a hit. The opening riff gives off the funk and when Bob kicked the beat, it got folks dancing. The studio version is fine but doesn’t quite capture the energy of performance.

Peace (in the funk),
Kevin