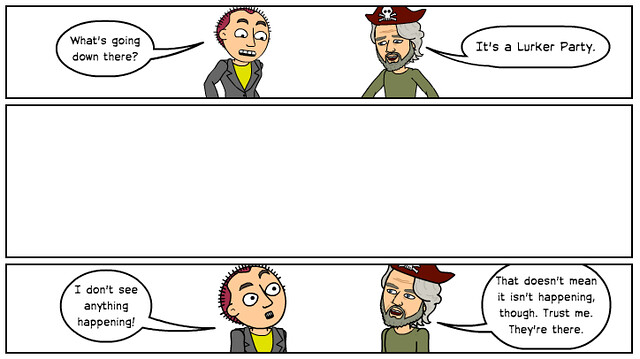 So, even though I wrote a post yesterday that said I was gonna lurk, you can see how I easily get pulled into the mix. Just writing the post itself, as Howard noted in a comment, meant that I was no longer lurking with the Connected Courses, and the whole shebang hasn’t even started yet.

One of the ideas that we really talked about and worked hard to value during the facilitation of the Making Learning Connected MOOC was how to best recognize and include those who were not ready to jump into the fray, but who either only wanted to watch or needed time to process before considering entry into the CLMOOC. As you might imagine, this stance of inclusion is made trickier by the invisible threads that connect participants to an online project. You just don’t know who is there, watching, if they never comment or participate. And if it is not a credit course where posting is required (the CLMOOC was not that), then it becomes even more of a challenge to understand the nature of participation.

But that doesn’t mean they aren’t there, learning along with everyone.

We found that out in the time between our first year of CLMOOC and the second, when we heard later stories of folks who lurked, brought ideas to the classroom or professional spaces, and then came back strong in the second year as active participants, grateful for the ongoing message of valuing those who lurk to learn. Others were a bit wary of the technology hurdles and needed time to process, to tinker on their own. And others just had little bits of time, so they popped in and out to see what was going on, but never participated. Not everyone is comfortable with learning in open spaces.

This sort of goes against the grain of basic teaching philosophy, right? No child left behind? We assume everyone needs to be learning and we need to gauge that the learning is being done. In online spaces, we often do that by tracking comments and blog posts and Twitter feeds. You can’t look across the room and see that someone is not participating and tell yourself and/or them, I’m going to call on you next, kid, so be ready with some ideas.

We don’t allow lurkers in our classrooms, do we?

Yet, lurkers are the invisible army in just about every online space there is, and they are the folks we don’t often value enough. There’s no cultural cache for the quiet, is there? That doesn’t mean they aren’t important. With CLMOOC, we made sure every newsletter had references to how we valued those who were just watching and learning. Posts in our online communities were purposefully welcoming to all comers, even those who were only passing through. This message (hats off to Joe Dillon for his work on this issue) became part of the ethos of the CLMOOC, even though at times it felt as if we were writing to no one (Most lurkers don’t respond when you write to them, as is the nature of lurking.)

Peace (in the outer worlds),
Kevin