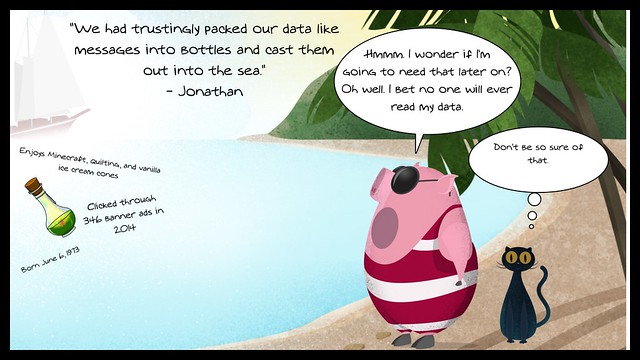 About ten summers ago, in my role as technology liaison with the Western Massachusetts Writing Project, we were setting up a blog site for our month-long Invitational Summer Institute. This was at the near dawn of blogging, and most of the participants barely knew the word, never mind the concept of online writing spaces. I was just learning, too. We were using a blogging platform called Manila, which had been graciously managed by the National Writing Project.

We decided early on to keep our Summer Institute blog closed and private, as a way to help build a sense of trust with our teacher-writers in a space that they didn’t quite comprehend. We wanted the hurdles low for writing and sharing and reflecting. We explained this to our participants, most of whom were relieved that their writing would stay private. I had the idea of taking head shots of everyone and having them all create profile pages as a sort of “get to know you” activity, and everyone agreed.

We set up the pages, which were successful, and then got down to blogging through the summer, and the online writing space was a hit with the institute. Connections were made. Classroom practices were shared. Writing was done. By the middle of the next school year, I had sort of forgotten about the blogging space. As with most summers, even now, once the institute ended, it was nearly impossible to encourage folks to keep on writing. The energy gets lost as the school year looms and our attention turns elsewhere. (which is too bad, but that is mostly the reality).

So imagine my surprise when I get an email from one of the Summer Institute participants, in a tone both angry and confused. This teacher was doing a Google search on herself, and lo and behold, she found the headshot of herself that we had posted in our private space with the promise that the content there would be remain private. She was upset and sort of panic stricken. Even then, I thought she was a tad too nervous (who would search for her image?) but I do not know her whole story (maybe she was hiding from someone) and I was just panic-stricken as the one who had told her things would remain private.

I had broken that trust and it gnawed at me.

I never did find out exactly how the image from the private site spilled into public view, but I suspect it was my own doing, not the site’s. The problem, then as now, is that once the information spills out, it was nearly impossible to stuff it back in. I did remove all the pictures from our site, and even sent a message to Google at the time (and encouraged her to do so) but I know the innocuous nature of a simple headshot would be unlikely to sway Google to move it off its search results. Months later, I could still search her name and still find her image.

I apologized more ways than I can count to this teacher. She never really did accept it, and made it clear that my role as an administrator of the site was a sacred duty, and if I promised something, then I had a responsibility to make sure that happened. Nowadays, we go into digital sites with a little more wiggle room in our expectations, I think. Facebook has done more to erode confidence in privacy issues in social media spaces than any other organization. We are both skeptical of privacy statements from companies and hopeful for the trade-offs.

Most of the participants in the Connected Courses are at the University level, and they have to grapple with the concepts of the privacy walls for their students when they move towards an open platform. If everything is open, how can a student protect their own privacy? Do they have that agency if openness is expected of them? Who is the gatekeeper? The instructor? These very complicated questions require learning about the flip-side of that question: how does one construct a positive digital footprint for yourself that will withstand the possibilities of breaches here and there? This is often one of the important points that Will Richardson makes so eloquently in his various talks and books (including the fantastic, Why School?). His line, not quoted verbatim here, is that when a high school student graduates, they should be able to Google themselves and find a slew of positive data, and our education system needs to do more to help make that happen.

For me, as a teacher of adolescents, it comes down to first making my 11 year old students even aware of the ramifications of their online lives, now and into the future, and we do an entire unit around this concept. Clearly, not enough parents are having those conversations at home with their children. To have choices, you must be made aware of the issue, and be helped along the way to be empowered. Trust between people, and between people and networks, requires awareness of the boundaries of information flow and the places where things might leak out. (Note to movie starlets: don’t take naked photos on your iPhone. Yes, it is despicable that someone hacked your account but what were you thinking in the first place?). We, as teachers, whatever the level, can’t assume our students, even if they are adults, understand this tenet of the digital age we now live in. Assume nothing.

Trust leverages awareness and knowledge, and when that trust is breached — as it was with me and the teacher in the story above — it can be nearly impossible to repair. That teacher never talked to me again, and I wear that responsibility and that memory like a scarf, and I think of it every time I set up an online space for young people and for teachers.

We are potentially entering the age of The Right to Be Forgotten, although I suspect it will be a whole lot difficult that some believe, particularly here in the United States. For me, as a traveler here in various digital realms, I still believe in the Right to Be Remembered, too, and I still think the positives of online interactions outweigh the negatives (call me naive, but that’s what I believe and trust in). 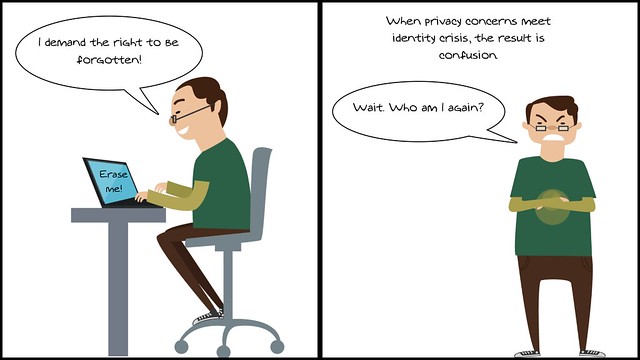