Just having some fun with Mozilla Webmaker’s Thimble, which makes everything completely remixable. Haven’t tried Thimble out yet? Give it a shot. Remix my How to Rock a MOOC. It’s yours to mess with. 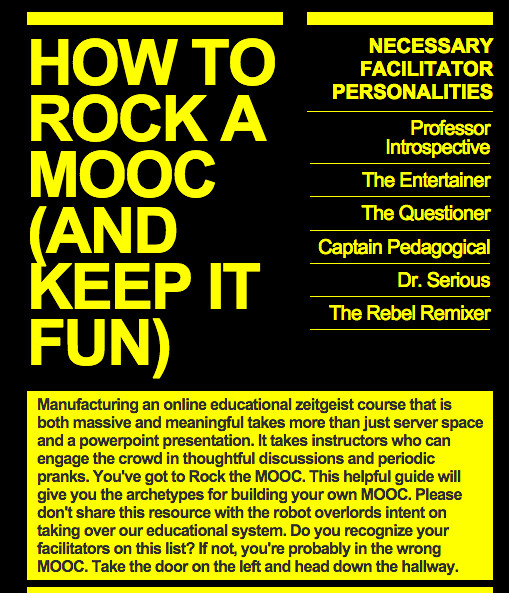 (Click on image or go here to see the full page)

Peace (in the mix and remix),
Kevin

There was no real reason for this comic — no one in Connected Courses is talking about Flipping the Classroom, as far as I can tell — but I had this thought as I was reading through the tweets and blog posts of some eager young professor somewhere going overboard with the idea of transforming their classroom experience, and how the graduate student helper might complain about being flipped. 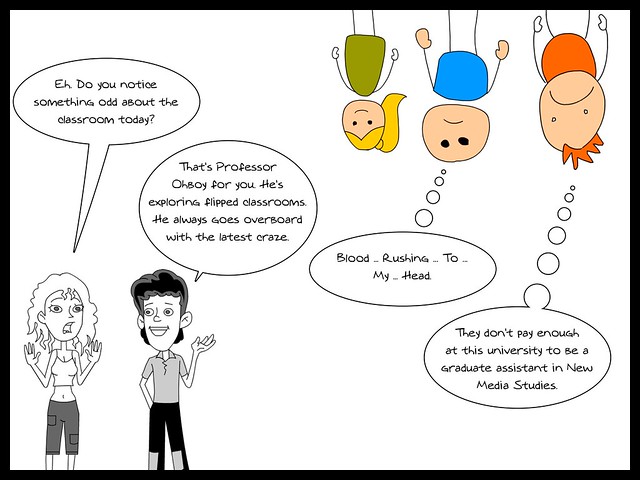 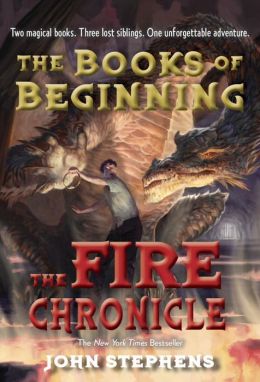 The Fire Chronicle is the second in a trilogy underway by John Stephens, and my son and I are completely hooked on the story of three siblings with a powerful destiny ahead of them to reshape the world (or save the world, it’s not yet clear) with three books of power.

The first novel, The Emerald Atlas, mostly tells the story of the eldest sibling, Kate, as she discovers how to move through time. The Fire Chronicle gives us the story of the middle child, Michael, as he becomes the Keeper of a book of great power of life and death. In fact, life stories is the great magical power that Michael gains as the Keeper, but it comes with a cost to his identity and memory and more. You know, “With great power comes great responsibility” and all that.

As with the first novel, this one is packed to the brim with adventure, interesting characters and multiple story-lines that bounce and weave back and forth before merging together, and then pulling back apart by the end (to set the stage for the last book). Stephens does a nice job of digging into the heads and hearts of the siblings, too, allowing their insecurities, family bonds, betrayals and secrets to guide the story forward.

For my son and I, the last page of The Fire Chronicle was one of those reader moments: Now we have to wait until next spring to get the last book in the series, The Black Reckoning, (which we suspect will focus in on the youngest and most unpredictable sibling, Emma), and we can’t wait that long! But we will. I already pre-ordered the book, and no doubt, we will get surprised when it arrives in the mail for us to dig into.

Peace (in the fire),
Kevin

As has been my mode lately, I was watching the most recent video from the Connected Courses project in Vialogues (Thanks, Terry) with Michael Wesch, Randy Bass and Cathy Davidson with my ear towards ideas that I might use in a comic. Of course, when you have smart people like that, interesting ideas float around like butterflies.

But something Cathy articulated resonated with me. She was talking about the growth of online learning spaces, and the tension between technology opening up new platforms for learning and the value (or not) of the “teacher in the room” as opposed to a screen at your desk.

Her comment about whether teachers can be replaced had me thinking. I know she was being provocative. 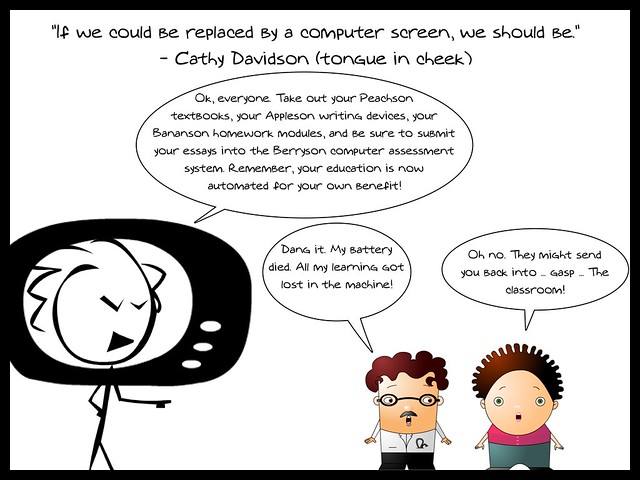 I could not resist poking fun at Pearson and its far reach into so many educational circles.

Later, after I tweeted the comic out, Cathy graciously replied that she liked the comic and then forwarded me her blog post in which she unpacks this very comment in a very thorough and thoughtful way. Go read it. (not being bossy; I think it is worth your time)

I made the comment back to her that I took her point to mean that we teachers (humans form) have to take advantage of what we bring to the table, live and in person. If we don’t and if we are just replicating the droning Q/A of a computer program or the distant teacher with no personal connections to their students, then why not just automate learning? I don’t believe this, although I see the value of online collaborative learning initiatives, but I do believe that we teachers – at whatever level you teach — have to take advantage of those learners in your space and work your butt off to make it worthwhile for them to be there with you.

Otherwise, the robot overlords will arrive … 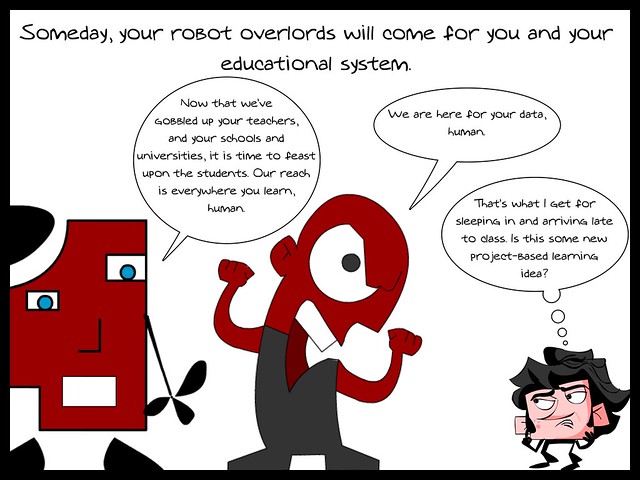 Here is some of the many things underway at the Western Massachusetts Writing Project. 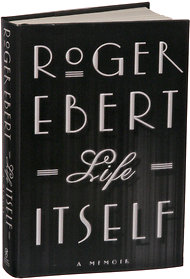 I remember reading about the blogging that film critic Roger Ebert was doing as he neared the end of his life, writing with depth about art, mortality and, yes, life itself. But I never got around to his blog, alas, and then, he was gone, succumbing to cancer. His memoir — Life Itself — is an interesting read, bringing us back into his life and career in the media business and then into his struggles with cancer itself. The disease took away his voice, and most of his jaw, but not his ability to write and say what he wanted to say.

Ebert does not make his life story a sad story. Instead, he brings honesty and raw emotion to his view on what makes a life worth living, and along the way, his words teach us something about how to look at the world through films, and therefore, through art. The book is a bit inconsistent, though, and you can tell these chapters were stitched together from blog posts and musings of Ebert over the years. Still, his pieces pack a lot of power. I found more than a few similarities between Ebert’s entry into journalism to my own (covering high school sports, asked to do art reviews, etc.) but of course, his accomplishments on his own and with Gene Siskel far outweigh my own pop culture reference points.

I had bought the book for my sons, both of whom love movies and have more than a passing interest in the business, but this book is more a biographical sketchbook than a dive into how to view a movie. Which is fine. I learned a lot about Ebert as a writer and thinker, and a person, than I knew before, and I came to understand the courage of not giving in until your last breath, to know that words may still carry you forward even when all else seems dark. That, in essence, is Life Itself.

And you may know that a documentary on Ebert is now out, too, based on the book.

Over at Connected Courses, the push this phase/cycle/week is into the “why” of connected learning and the why of teaching itself. A lot of people are sharing out this video by Michael Wesch, who has been pushing his university students into interesting terrain around digital humanities and culture and information flow. His use of the questions of “why” and “what” and others had me thinking of the classic Abbott and Costello skit. 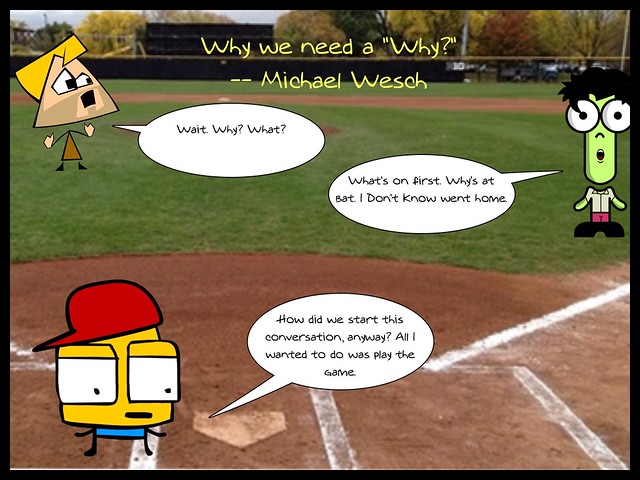 Of course, Professor Wesch’s talk is not a comedy routine. And it is worth viewing.

Peace (in the why),
Kevin

An inquiry question that is emerging during this cycle of the Connected Courses is “Why I teach” and a bunch of people are writing and sharing media on this particular question. It’s always a good question to ask.

I went the comic route, although I felt a bit constrained by the format of the comic. I had to limit my explanations, I found. Still, I hope I communicated the complexities of teaching young people. It will be interesting to see how my own ideas of teaching intersect with other #Ccourse folks, who are mostly university professors/teachers.

Why do you teach?

Peace (in the inquiry),
Kevin

(This is for the Slice of Life, a regular writing activity hosted by Two Writing Teachers.)

“So, ” he said, juggling a neon green soccer ball in his hand, “I got all my homework done.”

I nodded. “Excellent. Now you can spend the afternoon outside, right?”

“Yeah. I have a soccer game,” my sixth grader answered, and then asked: “Do you have homework?”

“Too bad for you,” he laughed, as the dismissal bell rang and he raced out to his bus, balancing the soccer ball in his hand, as I yelled out “have a great afternoon” and made my way back inside on a beautiful end-of-summer/start-of-fall afternoon, facing another four hours of meetings. And homework assignments.

Some students are finishing up the optional project of creating a Six Word Memoir in our webcomic space, and they are quite interesting to view. Here are a few that stuck out with me: 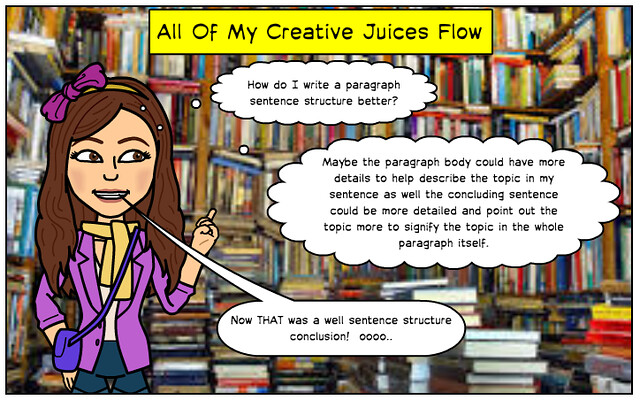 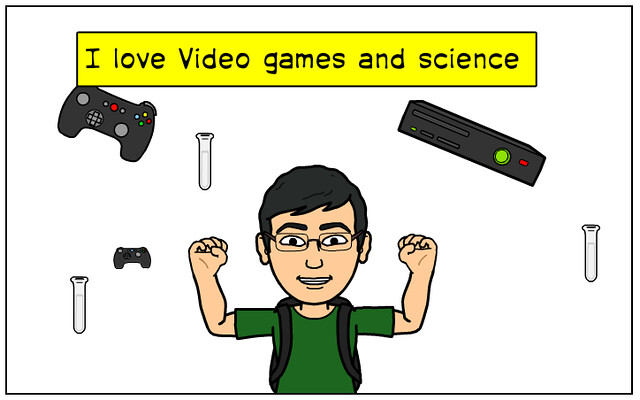 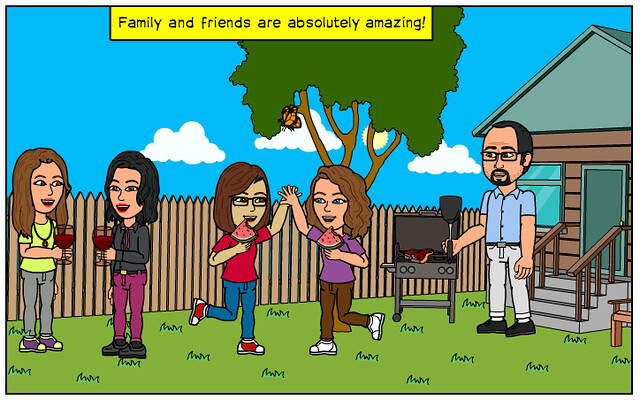 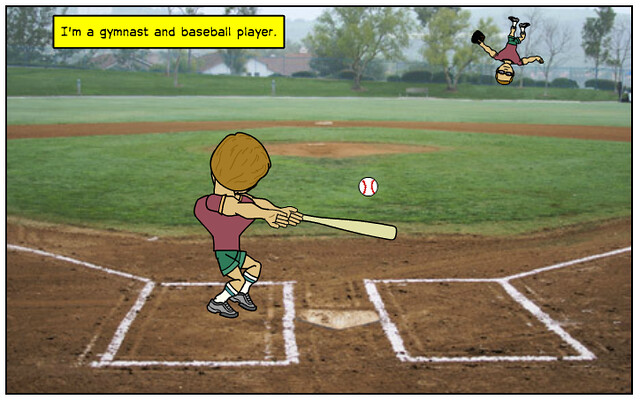