I had the good fortune to sit in on a workshop at the Western Massachusetts Writing Project and the topic was how to use memes for literary analysis, with a look at poetry in particular. The presenter was a middle school teacher, Jacqueline Desmarais, and she had us looking at memes and then using them to analyze Emily Dickinson’s poem, I’m Nobody – Who Are You?. This piece speaks to fame, and privacy, so connects nicely to the issue of viral media in this modern age.

Jacqueline asked us to create a few memes, based on the poem itself, and here are two that I came up with, as rebuttals to privacy issues. 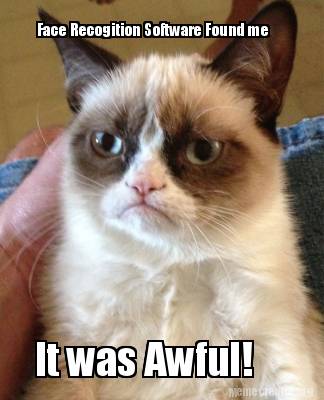 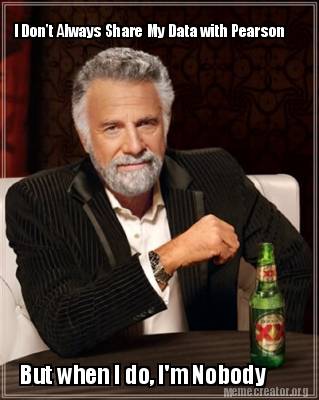 Next, we had to write an analysis of our meme creation, which is a smart way to bring thinking into the activity.

This is what I wrote:

I chose Grumpy Cat and Dos Equis man for my two memes inspired by the Emily Dickson poem, I’m Nobody. Staying within context and structure of the meme can be tricky, as you are fitting an idea into a prescribed slot. Plus, the visual literacy skills rise to the surface here. Add in the tone of humor or satire or sarcasm, and you notice rather quickly that tere’s a lot going on with composing a meme.

For the Grumpy Cat meme, I used the caption “Face Recognition Software Found Me …. It was awful.”

For the Dos Equis meme, I wrote, “I don’t always share my data with Pearson…. but when I do, I’m Nobody.”

I was aiming to get at the poem’s central idea of controlling your identity, and keeping that privacy sacred. In these times where corporations are leveraging technology and digital media, and social networking spaces, for their own financial gains, it is increasingly difficult to keep that privacy wall up, short of not participating in the technological revolution now underway. With our students, this is an issue, and teaching them about the benefits and the drawbacks of engagement with digital media and online spaces is a critical part of preparing them for the world.

We can do this without the fear tactics – of bringing in the district attorney’s office and state police units to talk about violations and legalities. We need to put the agency of privacy and identity into the hands of our students. They need tools. They need clear information. They need us to be on their side, and not always in a punitive manner. Using memes to help teach this lesson could be just one way into the digital composition.

What I was thinking was a natural extension from this lesson is the idea of a remix, of changing the tenor and tone of the meme, and for making their own localized memes – cultural references that only can be “read” by a local audience (school-based, for example). This would provide some intriguing discussions around the concept of viral information, in both the possibilities and the drawbacks. Over at MiddleWeb, I posted a book review of a collection called Bridging Literacies with Videogames that looks at video games as vehicles for learning through various lenses. I found a lot of the pieces in this book helpful, even I wished the inquiries went even farther in some places.

Peace (in looking at the game),
Kevin

Anne Marie Osheyak was our keynote speaker at last weekend’s Western Massachusetts Writing Project Best Practices conference. Anne Marie is the 2014 Massachusetts Teacher of the Year and an advocate of social justice in education, as well as a powerful educator with strong views on the profession of teaching.

This video collects some of the elements of her keynote address, which was met with a standing ovation from the conference as she reminded us to “reclaim our voices” as teachers in this age of data points and assessments, and that none of us are “just teachers.” At my Working Draft blog over at MiddleWeb, my latest post is about our whitewater rafting trip and the idea of seeing our students in a very different environment (literally/figuratively) when we take them outside of our traditional classroom setting.

Check out Experiential Learning: Take Us to the River

Peace (in the current),
Kevin

The focus on the Web in Connected Courses reminded me of this fascinating, if slightly alarming (for sheer flow), tool from Gary Hayes that shows the flow of social media being created and shared at any given moment in time. Get it running and then come back after a few minutes. You’ll see what I mean …

I show this to my students, and with parents, and even with other teachers, if only to give a representative scale of how technology and digital media inform our lives these days.

(This dovetails nicely with Slice of Life) 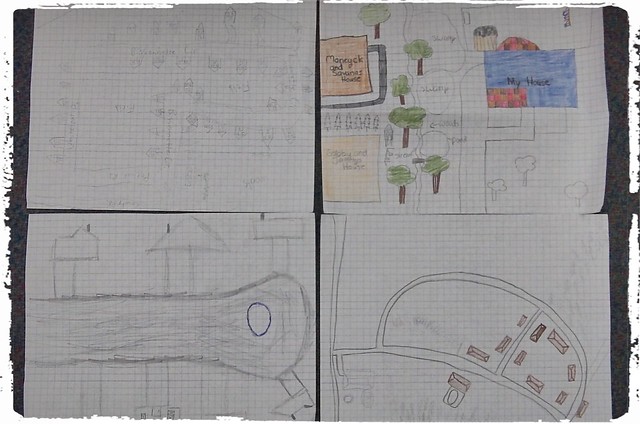 My students were working on maps of their own neighborhoods, as part of the National Day on Writing yesterday. We were using mapping as a way to think about community, about how mapmakers focus on what is important and what is not so important by using color and scale. And as students shared out their maps (with our classroom and then, online, with the #6Connect project), the discussions of neighborhoods transformed into discussions about community (with a little help from me). 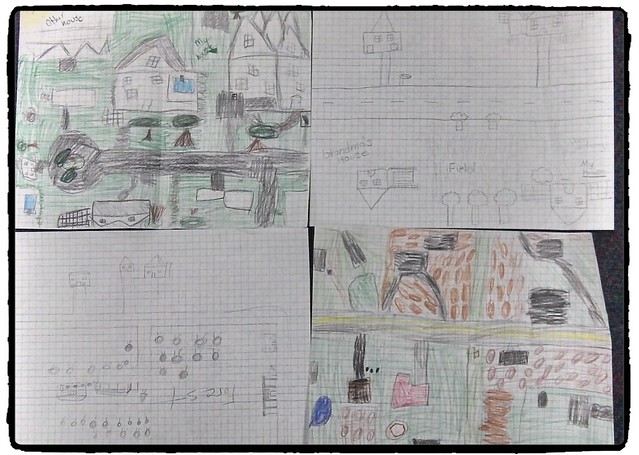 I love the idea of visually representing a place, and my students enjoyed thinking of how to represent their neighborhoods as a map as well as providing some insights into where they live on a day when we were writing and thinking about community for the National Day on Writing.

Peace (on the map and beyond),
Kevin 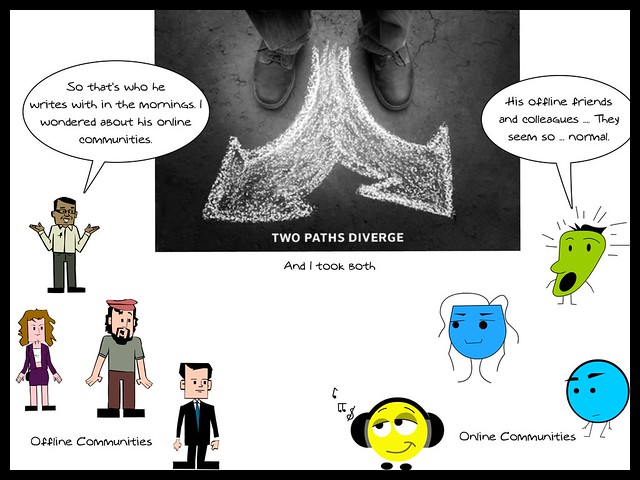 This is a comic for the National Day on Writing, as we think about communities that we are part of as writers and teachers. I was thinking of my online communities and my offline communities, and how there is not an either/or when it comes to connections — it can be both.

Peace (in the midst),
Kevin 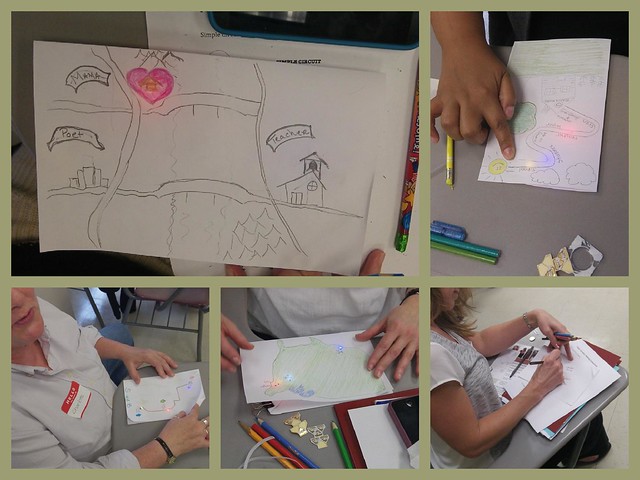 Today is the sixth annual National Day on Writing, sponsored by the National Council of Teachers of English and various partners (like the National Writing Project) and this year’s theme is Writing Your Community. I’ve been mulling over how best to do this, and decided that mapping out communities — either literally or metaphorically — made a lot of sense.

Check out this workshop that I led at our Western Massachusetts Writing Project this weekend, in which we played around with paper circuitry to illuminate nodes on maps of our communities. This workshop was part of our annual Best Practices conference, and the group of teachers were highly engaged in this hands-on activity around transforming notebooks with circuits and lights.

Peace (in the notebook),
Kevin 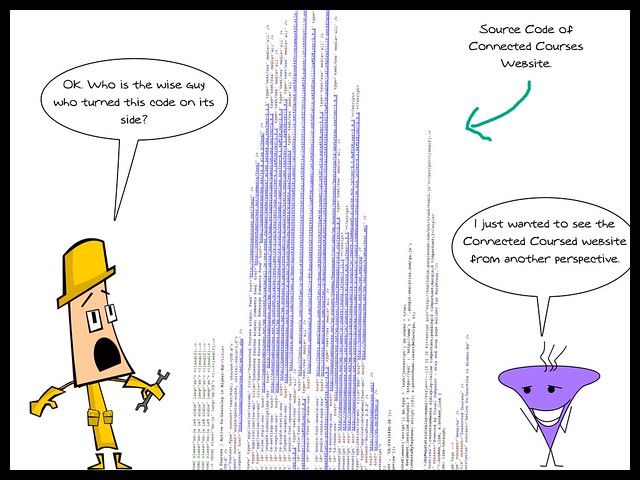 The other day, I had a chat with one of my sixth graders about websites. He’s interested in technology, mostly in terms of app development and mobile devices, but he was wondering about how the Web works. I pulled up the source code on our classroom website, and showed him what is really behind the magic of what we see.

He was transfixed. It was the first time anyone had ever shown him how to lift the veil of the Web and see the actual invisible infrastructure of the language that makes the Web run as we see it, as something we take for granted is a visual experience. I liken it to some magical experience. What we see is not necessarily what the reality is. It was this shift, via Netscape, into the graphic nature of the Internet that changed everything, right?

And someone, or more likely a collective somebody, has worked to make this experience of using the Web what it is today and what it will be tomorrow. There’s obviously a long line of innovative people — from Tim Berners-Lee, to Marc Andreesson, to countless others — who have radically changed the way we interact with information via the Internet. Seeing the source code of a website is an eye-opening experience for people, like me, who don’t often think or consider why this blog works the way it works. A look below the hood makes you appreciate the complexity of the code, even if it feels like a foreign language to most of us.

Give it a try. Check out your own source code (mostly, you can do that by right-clicking on a webpage and using the “source code” option). What do you notice about your site? We’re examining with the Web in Connected Courses, so this is a good time. Go deeper. What do you see?

Peace (behind the visual),
Kevin

I am honored to be one of the keynote presenters for the 2014 K12Online Conference, which is set to launch tomorrow (Monday) with a week of presentations around gaming, game design and gamification. Here is the video teaser that I made, talking as I play a student video game.

The name of my keynote presentation, also set for release tomorrow (Monday), is Game On: How Design and Play Impact Learning. I even dance in the keynote. I know. I know. The things a presenter will do to get your attention …

My keynote has less to do with overall gamification ideas and more to do with game design elements can be learning elements in the classroom, with a focus on my own sixth graders’ Science-based Video Game Design project.

You can find the full schedule of the K12Online Conference here, and be sure to check out Wesley Fryer’s opening salvo, Igniting Innovation in Teaching and Learning.

Peace (in the learning along with you)
Kevin