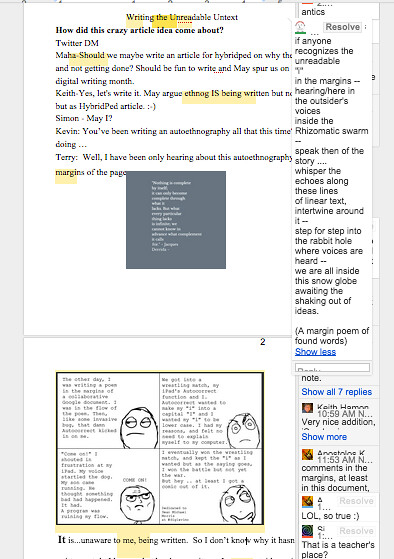 Phew. Just writing the title of this blog post is a bear of an idea to get my head around, and I don’t know how to even write what I want to write here. So, let me try to frame it, if I can. I am somewhat “collaborating” with a handful of others — facilitated by Maha B. and Keith H. — on an ancillary document about an unwritten autoethnography of the Rhizomatic Learning uncourse/discourse we were all part of months ago. (ie, Rhizo14).

The collaborative document — entitled for now as Writing the Unreadable Untext — is an attempt by Maha and Keith to explain why the autoethnography hasn’t gotten done and in creating a document about an unfinished document, they invited others into the mix, and man, we have made a mess of it. Half-finished sentences. Notes and poems and ideas in the margins. Embedded gifs. Comics. Poems. It’s a like roadmap to nowhere and yet … and yet … it’s also a roadmap to somewhere.

Here, I am trying to unwrite it … deconstruct what I see in there.

You see, in this collaborative piece, I get the sense that we are exploring the idea of voice, of emergent writing in a shared space, of giving up control and ceding authority to the group, of pushing the text beyond the text and into the margins, of playing against the stereotypes of what writing is and might emerge as, of how the visual plays of the written word, of how our collective thinking may or may not be able to be neatly tucked into one single document that represents us all. We seem to be pushing back at the very nature of what we expect writing to be.

All, by the way, in harmony with Rhizomatic Learning, so even amidst the crazy chaos of that document, we are modeling how the swirling, decentralized ideas of many can gravitate around some anchor ideas that may indeed make sense. We’re writing beyond the writing, and from the outside, it looks like dissonance. From the inside, it looks like a new creature of ideas coming to life, even though we can’t say for certain how it will be shaped when it is fully evolved (Pokemon!).

Maha asks if we can move it another step forward, into something more readable and publishable. I’m fine with that, I suppose, although I don’t feel the need, either. If we think of writing as nourishment for the self (I write to learn), then this document, in all of its starts and ends and middle roads to the margins, has done its job for me.

By the way, I realized this morning that I never saw the original document — the original autoethnology draft — that inspired this reflective piece on why that piece wasn’t getting written. I thought this was the piece. I had my anchor set on a different pier, and still, we set sail. Of course, then I found the original, and realized I had contributed to it, months ago, and it was like finding some echoes of words from my mind and being reminded of myself on the screen. I was there. I didn’t remember being there. Odd? You bet.

Peace (in the rhyzome),
Kevin