My favorite comic app — Comics Head — just got a big update the other day, and now, it allows you to easily add audio to comics. You can then export to YouTube for sharing.
Uh oh.
Peace (in the frame),
Kevin 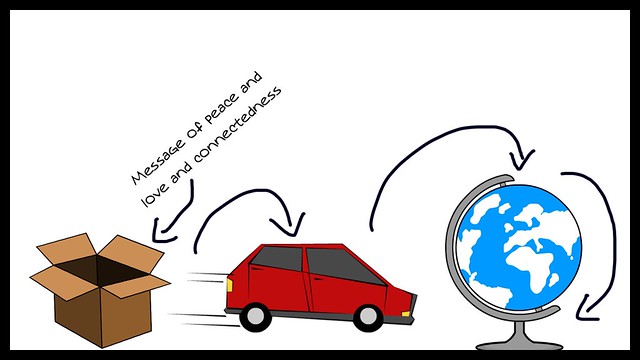 (This is part of Slice of Life, a weekly writing activity hosted by Two Writing Teachers in which which bloggers write about the small moments. Come join us! Write your slice!)

The boy, maybe more than 8 years old, sat with his back to all of us. On the floor, near his knee, the tin of colored pencils sat open. On the chair, situated like a table, a small notebook was open and propped up against the back of the chair, a handheld Nintendo DS was open to a game screen. His fingers held the colored pencil, and he examined closely the screen, and then he began to once again color.

He was oblivious to the rest of us in the waiting room of the pediatrician’s office, where I was sitting with my son, waiting for our turn to get called to the exam room. The only sound other than the chattering of the office staff was the gurgling of the fish tank. All of us were watching the back of this artist, mostly absentmindedly. Just something to stare at during the waiting.

I watched him, too, though I suspect I was more interested than others, for whatever reason. As I had walked past the boy artist, I had noticed the game on his DS open and his illustration underway was stunningly beautiful, a painstakingly detailed imitation of the screen. I was intrigued. I watched as he slowly, carefully, methodically put away one colored pencil and then carefully, slowly, methodically chose the next color. There was nothing random to what he was doing. It was all very deliberate.

Then, a bit of panic. His fingers searched for a color. Moving pencils back into place. Fingers. Fingers. He glanced around, and I could see something in his eyes. He quickly looked at the ground. He looked on a nearby bench. He put all the pencils away and stood up. He checked himself, hands on pants and in pockets. Glanced around again, for the first time seeming to acknowledge other people in the room, if only to silently accuse us of theft of a pencil. I almost wanted to say, I didn’t take it! I didn’t steal any of your pencils! Do you want me to help you look?

But his mother and older brother came out of the examination room, and he quickly packed up his art gear, gave one last look around, slammed shut his DS, and in seconds, he and his family were gone. Me? I kept looking around for that boy’s lost pencil, for what if that were the exact color he needed to finish his drawing and it was nowhere to be found?

What then? And I could not help wondering later, what color?

Peace (in the artist),
Kevin

Here is a screenshot/video capture look at some of the science-based video games my students are creating, along the science-based theme of cells. You can see a bit about how they are using text and story to frame their game within a science and narrative context. The project weaves game design, science and narrative story together, and many students are now either done or finishing up.

Peace (in the cell),
Kevin

As part of a MOOC about writing and teaching, with The Writing Thief book as our source, we’ve been out looking for found texts. I was perusing the program for our city’s First Night celebrations, and discovered all sorts of neat and nifty phrases about the bands who are performing.

Peace (in the found),
Kevin

Check out this student’s wonderful video game project. He really “got it” on all three levels — game design, storytelling and science. 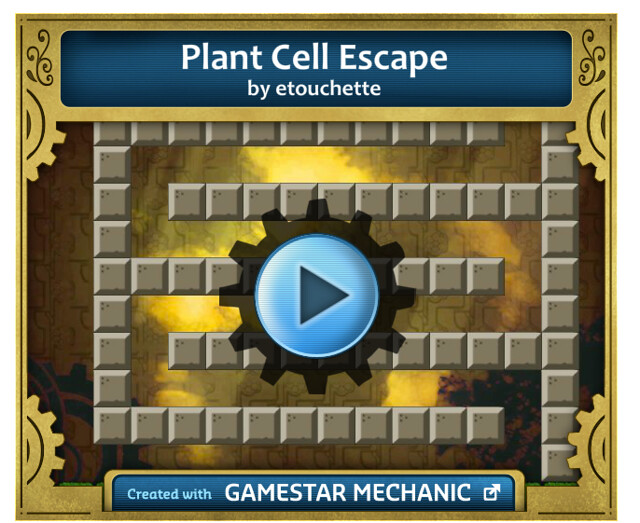 As I was reading and assessing video game reviews by my students, I created a list of the games they chose to write about. Here is a Word Cloud of the most popular of the video games in the mix for my young writers: 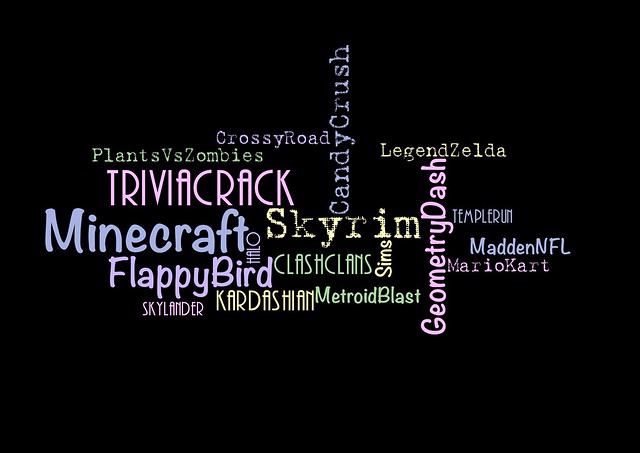 You’ll see that Minecraft is there, front and center. No surprise. But Trivia Crack? Lots of girls are playing the app, apparently, and if the reviews are right, it is a social game of sorts with trivia. Never heard of it. There are some games that make this list year after year, and others that come out of nowhere, depending on culture and games introducing during the year. Crossy Road … another one I had not heard of, but apparently it is a variation on Frogger.

While the game review does not have to be a video game, only one of my students chose a board game this year. All others were video games on assorted platforms.

Here is a review podcast of a student reviewing Metroid Blast:

Now, here’s my story of how I found Jack Blank. My 10 year old son and I had just finished reading aloud a book and we panic (not really) when there is nothing in our Queue. (not really true … we have stacks of books but still …. ) Luckily, we have a public library (cheering now) and so, we ventured there on Saturday morning, and as he sat on the ground with a pile of graphic novels and comics, I perused the shelves.

I had no plan for choosing our next read aloud. You ever go into a library with no plan? Just let your eyes wander and see what they will see? Pull books out. Look them over. Put them back. Move a few feet. Pull. Back. Look. Move. I do it all the time, and I have come to mostly trust my instincts, even though I realize that cover design and titles of books play an important role in getting my attention in the stacks. So be it. I am sure there are folks in publishing companies whose entire jobs is to make sure their book hooks my attention. I am a happy fish most of the time.

That’s how I came to find Jack Blank and the Imagine Nation. (And later realized, with some confusion, that an earlier version was called The Accidental Hero.) Anyway, the title was intriguing. The cover was pretty cool looking, sort of echoes of Percy Jackson. We took the thick book home, dove in and got hooked pretty quickly. While my son is often the first to notice how writers steal (*cough* borrow) from each other, and while he has made many observations about writer Mike Myklusch’s tale of Jack Blank having similar characteristics to other stories we and he have read, that has not stopped either of us from devouring this story on a daily basis, and now we are on to the next book in the trilogy (The Secret War).

Maybe it has to with the superhero theme or how comic books inform the first part of the story. Whatever. We are locked in tight with 12 year old Jack Blank, whose past is sort of a mystery, and whose powers over machines and technology become a centerpiece in the fight against an alien invasion that uses viruses (human and cyber) in an attempt to destroy the Imagine Nation (where superheroes and others who believe in the unbelievable) and the Real World (where we all live .. most of us, anyway).

Myklusch is spinning a interesting story, full of action and the unknown, and I am surprised this one was never on our radar screen before. I had never heard of it. You want to hook adolescent boys into reading? Put Jack Blank in their heads and watch out. They will devour this book, and the second book is just as good (if not more layered than the first).

We’re in it until the end …

PS — Since I wrote this, and kept it in my draft folder, we finished The Secret War (thumbs up) and are now on the last book in the trilogy, The End of Infinity.

As a companion to our game design unit, my students also write (and many podcast out) persuasive game reviews. The lesson is to integrate writing into our understanding of game design and writing with authority on a topic. Plus, I get a better sense of what games my students are playing year to year (It’s not easy to keep up).

Here is a review of The Legend of Zelda: Twilight Princess

This is our family holiday tradition:

Peace (whatever your faith and beliefs),
Kevin