In preparation for next week’s Hour of Code, check out these quotes from Douglas Rushkoff’s great book, Program or Be Programmed.

As we begin our video game design unit, we spent time talking about and working with games. The other day, we wrote and then discussed the elements of game design, with the question of what makes a good game good and a bad game bad? Here are word clouds with the main ideas shared by students over four classes. (Note: we did not focus on video games specifically, but any game — board, card, recess, sports, etc.)

As they begin designing their own science-based video games in the coming days, we will be referring back to these word clouds as a guide for them to remember what makes a game good and what potentially makes a game boring.

Interestingly, this is the first year that advertising and in-app purchases became part of our conversations. Most were annoyed about the “free” entry to a game, only to be confronted by pop-up ads or in-app purchases needed to move to another level or gain some new tools. That led to a discussion about “business models” and a reminder that non-tech games don’t have those intrusions.

Nor do games that you make and create yourself … 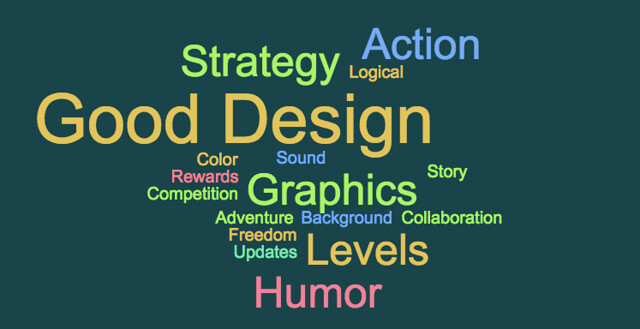 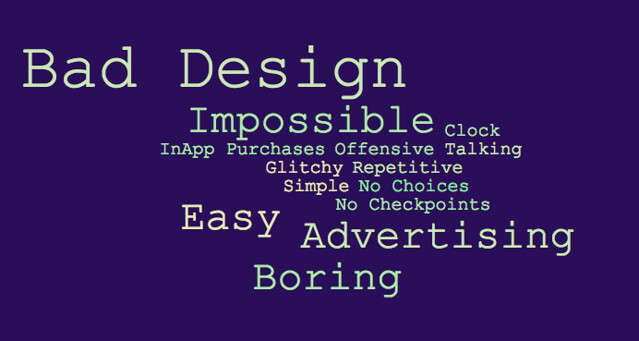 (This is part of Slice of Life with Two Writing Teachers. We write about small moments. You write, too.)

They were standing in line, waiting to put the laptops back on the computer cart. We’d been gaming in the classroom, working with Gamestar Mechanic to begin the process of understanding video game design by playing and analyzing games. This week, they will start the initial stages of storyboarding and building their own science-based video games.

He spoke that last line as if he walked into a pit of vipers because there was a sudden burst of loud response from the girls. I think I saw a few of his friends shake their heads, knowing what was coming.

“What’s that supposed to mean?”

“Of course, I like video games. I’m probably better than you.”

He seemed a bit shaken by the response. That’s good.

“Sorry, sorry,” he mumbled, and that gave me a teaching moment to talk to the class about the stereotypes we have of gender and technology. It’s true not every girl likes video games. Not every boy likes video games, either. But some girls are great at both playing and designing video games. And we had just had a long discussion on game design elements, where plenty of girls shared deep thoughts about design and and the games they played. (Had he even been listening?)

I think he got it. I do. And if not, the girls are going to set him straight. Count on that.

Peace (in the room),
Kevin 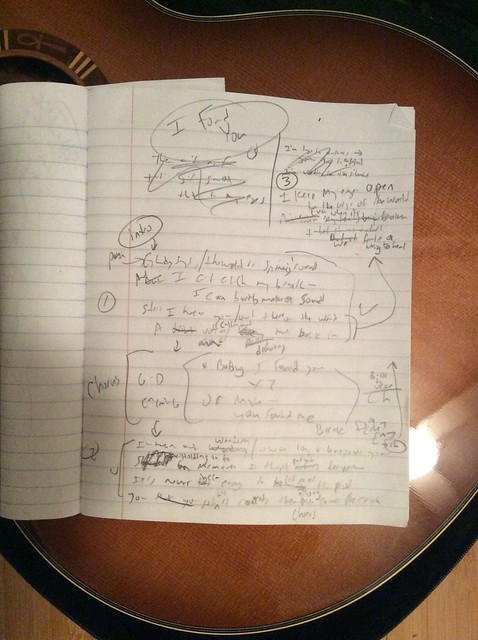 I spent part of the day yesterday with my guitar, writing a song. The picture above shows the map of my ideas. I do a whole lot of scratching out, revising, moving words, adding chords when I write songs. I try to wrangle sense out of the ideas, and then hope that the words will be partners to the chords. Sometimes, it works. Often, not.

Anyway, this song came together over the course of the day, so I did a small demo recording with the Garageband app. If you are interested, you can give it a listen. This is another song that is not really all that in line with my rock band’s sound, so it may just sit on the burner for some time. It may be part of a longer project I have been working on for years that mixes songs and poetry to tell a story. It might just get forgotten. Who knows.

Listen to Baby, I Found You.

Peace (and thanks for listening),
Kevin

Baby, I Found You

Everybody says, the world is spinning ’round
I can’t catch my breath – I can barely make a sound
Still, I hear you out there on the wind
A voice calling me out, drawing me back in

I’ve been out wandering – this long, lonesome year
Holding on to memories I thought might disappear
It’s never been easy to let go of the past
You got it all covered — then along comes the crash

I keep my eyes open to the ways of the world
Even when it’s broken, we find a way to heal
And I hear you out there on the wind
A voice calling me out, drawing me back in 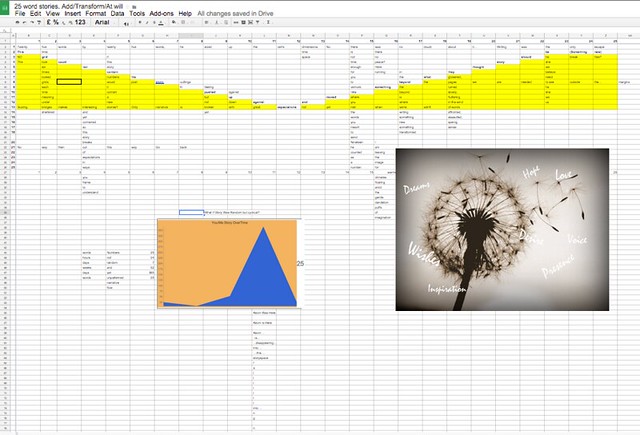 During Digital Writing Month (which took place throughout November), the narrative of how we tell stories often got upended a bit as we explored how technology is changing the shapes of stories themselves, as us, as writers of those stories. How fitting, then, that Simon took the concept of the #25wordstory (a Twitter activity to write a story in 25 words or so) and slotted it into a spreadsheet grid, and then opened up the grids for others to add to.

I dug in yesterday morning with gusto, and quickly began writing all over the place, shifting from grid to grid, extending stories out from single anchor words so that the narrative arcs move in all sorts of directions. Truthfully, these became more like story fragments, little puffs of ideas floating in and among the rest of the stories. We pushed out beyond the margins. Added images and charts. Made links to places outside of the story.

So, what does this all mean for writing in the digital age? I can’t say with any certainty what it all means, to be honest, but there is something there in this kind of transmedia-like storytelling — an associative leap that writers make when both writing on the same page as someone else on the other side of your world and when you carve out stories in unknown territories. A spreadsheet as story? A spreadsheet as a map of the territory? Yes, once you get past the idea of what a tool is designed for you (spreadsheets-numbers) and open up your imagination to what a story needs to thrive.

Peace (beyond the territory),
Kevin