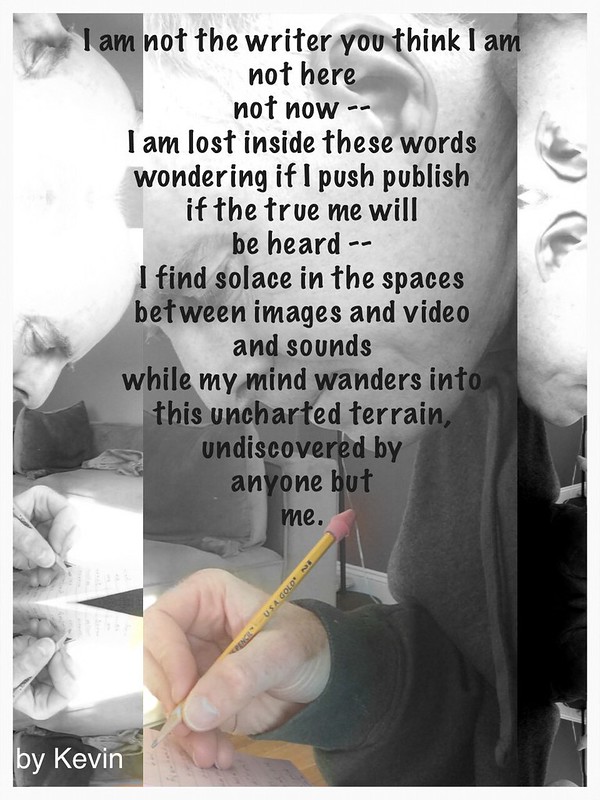 At Walk My World, we are diving into identity in this cycle,which is always a fascinating topic to explore when it comes to who we are in digital spaces (or whom we project ourselves to be) and who we are outside of those digital spaces, and where are the intersecting lines.

With my sixth graders, our work around avatars is centered on this concept of identity — who we choose to be when we are online, and how to make sure we have that choice. Want to see an interesting collection? Go to the New York Times piece about avatars in gaming environments. They put photos of the real person with their avatar, and it is a stunning example of how people project who they want to be in digital spaces.

This poem of mine is one way for me to think of my own act of writing and publishing in online spaces, and the question of: Is that really me writing there? I think we all hold back part of ourselves, even those who dip over the TMI line, and so what you see in these words here is just a glimpse of me as the writer. I wrote the poem, trying to show the veil that is there for all of us, and how the push into the digital spaces we inhabit both foster this concept of multiple identities and collapse it … sometimes doing both things (expand and collapse) in the same moment.

I took the photo on my iPad as I wrote the poem as a draft. I had this idea of writing a few lines about writing (the first line was my first idea) and I wanted a shot of my with pencil on paper. Not keyboard and screen. I still write a lot on notepads, particularly when I am writing poems and songs. Those drafts then get written on the screen, but only after much scribbling and much reworking (and sometimes, head scratching over what is that word that I wrote anyway …).

Taking the photo required a bit of human origami. You don’t see my left hand reaching out behind the Ipad, twisting my thumb to the large circle that will take the shot. There’s got to be a better way …

I moved the photo into an app I have called Fragment, which allows you to mess with the photo in any number of ways. Since this piece is about identity, and mixed identities, I thought it would make sense to fragment the photo itself.  I then moved the photo into the free Aviary app (a must-have),  added a border and then finished the poem itself.

I liked how one of the tools in Aviary allows you to color in small sections, so I kept the color focus on the pencil and my hand, writing. This brings the eye into the writing, which is the heart of my identity in this poem.

The photo is hosted at Flickr, which allows embedding in media sites.

Peace (in who I am right now in this writing),
Kevin