I’ve been working on this demo song that meshes nicely with Walk My World and the YouShow project. It is inspired by a friend but also, some distant memories of my hiking days. So here it is: 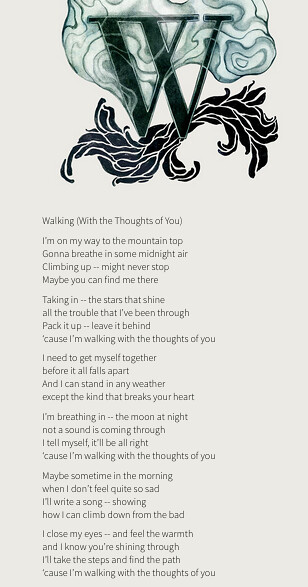 And this version via Zeega:

Interestingly, Terry “remixed” my Zeega, which means that at the end of mine, his version begins (new song and new media). Be sure to experience both.

The guitar part for the song is an echo of a very old song of mine, one I wrote about my grandmother when I was first starting to write songs (oh so long ago). I didn’t want to lose the chord progression after rediscovering it and I kicked around with it for a bit before the lyrics started to take hold here. The words are sort of a gift to a friend who is going through some difficult times right now and who spends many days hiking in isolation as a way to think and understand the world (truly, walking the world). I put the final lyrics into the app Notegraphy, which makes words look fancy, and then downloaded the lyrics as an image file. I uploaded the file into Flickr, and then used Thinglink to “borrow” the image for annotation. The song was recorded very simply (live take, no dubs) in Soundtrap and then exported into Soundcloud for embedding here, there and everywhere, including Zeega (which borrows audio from Soundcloud).