The image above is a visual wave-file representation of an audio poem I wrote for the learning cycle of Walk My World — where the focus is on the dawn. And it turns out, the YouShow theme recently has been audio, too. The audio recording here was done in a very nifty online tool called SeeSound, which I found thanks to two Maker/CLMOOC friends — Stephanie and Rob. I love the audio-becomes-visual element, and I wish I could download the live view as video (I guess I could take it as screencast).

I wrote this poem in the hours before dawn, when I am up before the world is up (mostly) and writing every morning. It’s just the dog and I, in the snowstorm this morning, and he goes back to sleep after our walk through the neighborhood while I pound on the keys here. I am often awake before I am awake. If I am working on an idea, I wake up, knowing my head was working out phrases and concepts during the night. If I don’t wrote, I lose it.

So I write before the sun comes up, just about every single day. (Like, right now). 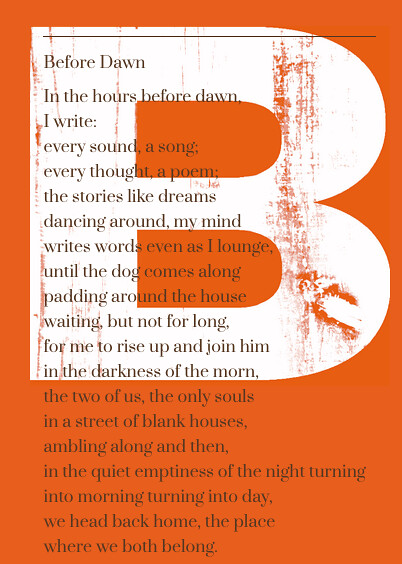 Here, then is my poem: Before Dawn. What I did was record it via SeeSound, downloaded the audio file, and then used the “reverse” switch to make the audio file go backwards (take that, Led Zep!), and tacked it on to the end of the forward file with Audacity, so that the poem is me moving forward and backwards. The poem then is hosted at Soundcloud.

Peace (in the visual poem),
Kevin