(This is for Slice of Life, a writing adventure with Two Writing Teachers. Each day, we are looking at the small moments of life and writing. You write, too.) 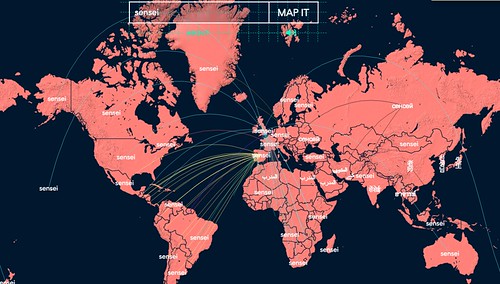 (Check out the Word Map for Sensei)

I am doing a read-aloud of a novel entitled Samurai Shortstop by Alan Gratz with my son. We’re both liking it (although the story starts with a ritual suicide by the protagonist’s uncle as part of a Samurai code ceremony and this unnerved me more than a little bit.) But there is a word in the story that I keep mispronouncing. Maybe you have your own arsenal of words that whenever you see it, you say it wrong.

My current word trouble is “sensei.” I don’t know why this one causes me so much difficulty. When I read it in my head, I hear it just fine. Sens-ay. When I read it out loud, it comes out Sens-eye. I suspect it has do with the spelling of the word. My son called me on the carpet last night. Again.

Him: Yes. It’s sens-aye. You said sense-eye again. Why are you doing that? It’s so frustrating!

I pause to look at the word. I’ve paused to look at that same dang word many times now. I’ve seen Karate Kid (both versions) enough times to know how it sounds. I put my finger on the word. I keep reading, and when I run into the word, I slow my voice down, carefully pronouncing each syllable. Se-ns-ei.

Him: Now you’re reading too slow!

This reminds me of a time when I was about seven years old, and I found I was saying the word “very” wrong. Somehow, without my even knowing it, I began saying vurrry (maybe I watched some British show?). A friend finally pointed it out to me (in blunt terms: why are you saying that word like that?) and it was like a punch in the stomach. What? What am I doing? I could not believe it. Then I said “very” out loud and sure enough, it was all wrong.

Him: That sound right. Now, can you keep reading?

Peace (in the pronunciation),
Kevin