(This is a Slice of Life, a monthly challenge to write every day facilitated by Two Writing Teachers. You can join in, too. Come write.) 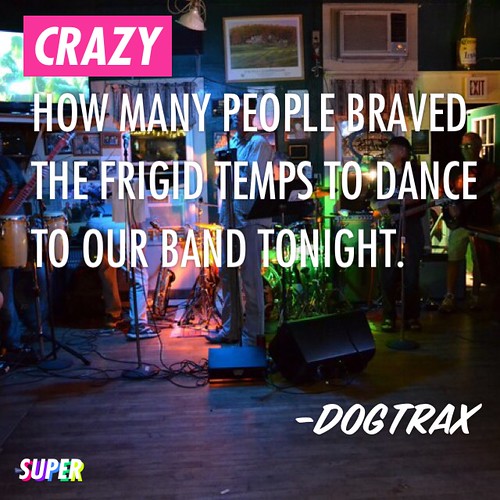 We have nicknames for some of the gigs my band — Duke Rushmore — has played over the years. We have the Ice Gig, where the roads were so slick coming home one night after we played at a bar in a very faraway hill town that we were all sure we’d end up in a ditch at 3 a.m. in the morning. There was the Bug Gig, where the outside event turned into a mosquito fest, and we were the main entree, apparently. There was the Quiet Gig, where we played loud but the audience just sat there, like stones in their seats, and refused to dance. There was the Loud Gig, where the engineer for the venue cranked it so loud people had to leave the room.

And now we have the Cold Gig. We played out last night at a brewery that does two-hour tasting (it is a real brewery, not a brew pub) and they have bands entertain the crowds drinking their homebrew beers. It’s a good gig, and we love playing there, which we do a few times a year. It’s a funky space — wide open floors, very little seating. You have to climb five stories of steep steps to get there (although the band uses the freight elevator). You rough it at this place.

Last night was a bit more rougher than usual. The heating was on the fritz (meaning: no heat) and the outside temperature hovered around the single digits. It wasn’t so cold we could see our breath but it was close. It took all of my courage to take off my jacket to play, and my saxophone — that temperamental piece of metal — does not like the cold air. We wrestled all night for the right notes. Oh, and the only toilet in the place wasn’t working, so there were huge buckets of water to use to flush.

But we had one the biggest crowds of the year there, with more than 160 people jammed into this tight space, dancing the cold night away to the music, and we warmed up quickly, jumping around and finding the groove, and it was a great night of music. It was the Cold Gig, but we turned up the heat, and it was all right.

Peace (in the gig),
Kevin