(This is Slice of Life, where we write about the small moments. The month-long writing activities are facilitated by Two Writing Teachers. You write, too.) 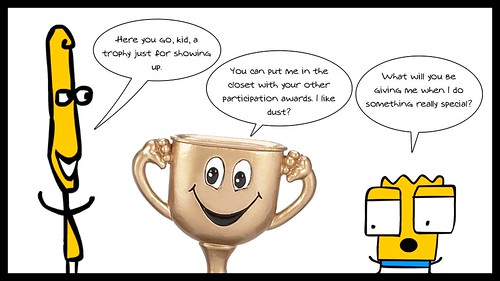 The coach means well. Yesterday, at my son’s last youth basketball game of the season, the coach of the team pulled the parents aside, explaining that he was sorry they had not won a game all season and that he knew some of the kids were frustrated. He talked about the hard work and drills he taught them. I don’t think he needs to apologize — it’s youth basketball, after all, and he did teach them new skills — and I think losing at a young age is not the worst thing in the world.

Then he went on to say that he was organizing a pizza gathering and he had bought participation trophies for everyone. He asked us, does anyone have an issue with that? I wanted to raise my hand. I wanted to shake my head. I wanted the trophy train to stop.

These kinds of good-hearted gestures by coaches seem like they have value on the surface — honoring the commitment of young players — but I don’t think getting a trophy just for coming to games on Saturdays really has much value. Instead, what we found with our older kids is that it does the nearly exact opposite: trophies have little value when you have a shelf of participation awards. It’s that old supply/demand concept.

We’re finding the same syndrome at our school. Our sixth graders leave our school to head to the regional middle school, and you would think they were graduating high school or college with the special events that go on. We’ve tried to tone it done over time, but the pull of parents is hard to hold back. So, the yearbook becomes this glossy affair and our Recognition Night is nearly a formal event.

I wanted to say, save your money, coach, we’re good. But he had already ordered the trophies and no other parent seemed even remotely the same way as I did. I could tell. So, I didn’t say a word. It turns out the day of the pizza gathering is a day our family is overbooked anyway, so maybe the trophy will gather dust in someone else’s house. I didn’t mention the trophy concept to my son and he didn’t ask. He’s more focused on baseball now.

Peace (in the award not really an award),
Kevin