(Each day in March, a whole bunch of educators are writing Slices of Life — capturing the small moments. It is facilitated by Two Writing Teachers. You write, too.) 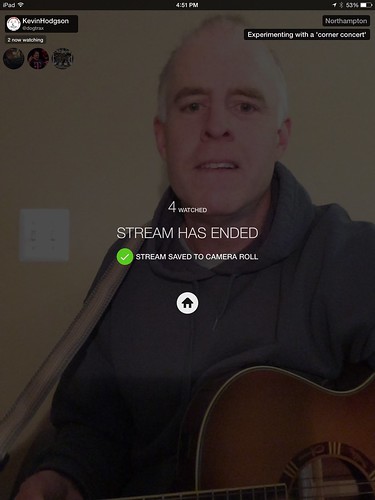 I have been curious about the live-streaming video app called Meerkat. It’s pretty simple to use. Download the app. Hit the play and you are live on Twitter and the Web. I guess Twitter itself is nearing a launch of its own app — Periscope, I think it is called — but I wanted to try out Meerkat myself.

So, I figured, maybe I will play and live-stream a song. I have this idea for “corner concerts” — short, one-song streams of playing live for a few minutes, maybe on a regular schedule, and see if anyone cares to listen.

I set up my iPad yesterday, grabbed my guitar and hit the play button and … well … played a song of mine, called Ease Your Mind. It was interesting because for the first part of the song, no one was watching. Little icons pop up in the corner when folks have opened your live-stream video. Then, I started to see a few visitors (in the video, you can can see me look at the screen and smile a bit), so I extended the song an extra verse and chorus before signing off.

Meerkat saves the video to your device, so I uploaded it into YouTube easily enough. I’ll keep tinkering and playing around, and thinking about the possibilities of your mobile device being a live-stream possibility (good for conferences, maybe?).

Thanks for reading. And if you were one of the icons in my stream, much thanks.

Peace (in the stream),
Kevin