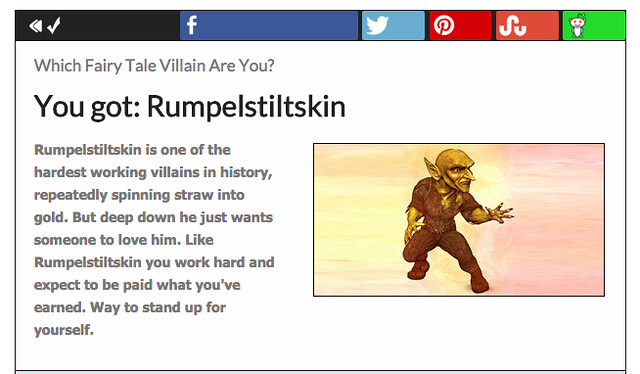 I took this quiz after read this post by Ellie in the Rhizomatic Learning network and I know it’s determination of me as that ugly child-stealing, gold-weaving villain is not worth a hill of beans (or maybe a mountain of straw?). But the post by Ellie is still interesting as a conceptual device, as she wonders aloud about how we can map ourselves to fairy tales. Fairy tales are such archetypal stories, right?

She pulls out an interesting bit that she once wrote that guides her own writing:

It has me wondering if Disney hasn’t spoiled this notion for so many of us, with its sugar-coated, Captain-Crunched recasting of Grimm Brothers’ stories of old, which were very scary and not always happily-ended, and often tended to resolve themselves on the fortitude and wits of the heroes and protagonists, not on the kindness of strangers.

I don’t know what fairy tale I would map my own life to in a way that makes sense (that would be a messy adventure), but the fairy tale character generator that put me as a villain like Rump is intriguing in itself. Spinning gold from straw? Blog posts from ideas? Stories from thin air? Poems from a single word?

I wouldn’t go about stealing your baby, but I might remix it a bit, changing the nature of your creative offspring to make it something new and interesting, and then, unlike Rump, I give it back to you, too. You don’t even need to speak my name to dispel the magic, and I won’t be dancing around a fire night at midnight, gloating over my plans.

Of course, one never knows.

Peace (in the tales yet to be told),
Kevin