I write songs, and often, I try to make commentary on the world around me (or inside me). When I read about the call for this week’s Make Cycle around systems thinking, I found myself struggling to push past game design from last week, where I also thought about systems design.

What came to mind as I re-read the CLMOOC post from our friends at the San Diego Writing Project was political systems, and how often they are broken. I was reminded of this last night as I was reading through and annotating A Letter to My Son by Ta-Nehisi Coates, as part of a Teachers Teaching Teachers webcast on race set for tomorrow (Wed) night. That piece in Atlantic, which is an excerpt from a new book, is a powerful reminder of how many of us are disenfranchised and removed from the systems of power and politics.

All this brought me back to thinking about songwriting, and I was reminded of when Hurricane Katrina ravaged New Orleans and beyond, and how the storm laid bare the neglect and poverty of so many people, and how the system failed them in the time of greatest need. In the aftermath of Katrina, I wrote a song — Katrina Blows In — that tried to capture what I was seeing. My previous band recorded it, and then that band fell apart, so the song has sort of been left off to the side.

But I still think of it as song about a system that failed, and the underlying theme of people reaching out to help each other when the system does not work. 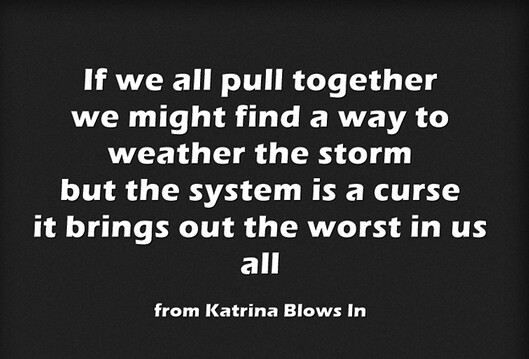 Peace (in the storms),
Kevin