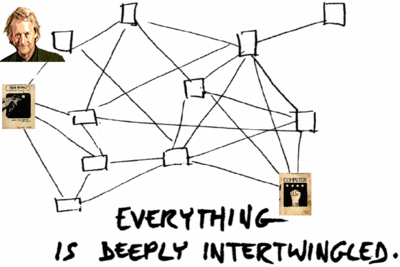 I’m in the midst of reading an interesting interview with Ted Nelson, who coined the phrase “hypertext” and then presented about it in a paper in 1965 (the year before I was born). In my mind, I think of the hyperlink/hypertext as the significant element that makes the Internet different/unique from other kinds of texts, and yet, we often forget about the magic of the idea.

Interestingly, Nelson, who identified himself early on as a filmmaker with screens as storytelling platforms, thinks we have become too narrow-minded on the Web by associating “hyperlink” with “hypertext” and his original idea of connected documents, seen on the screen at the same time along with the “bridge” that connects the documents reminds me of the FedWiki project, in a lot of ways.

In the interview with Nelson on Boing Boing, celebrating the 50 years of the introduction of the concept of hypertext at a conference, some of his answers to questions were very interesting, and worth collecting.

Oh. Yeah. The hyperlink to the interview is here.

There was nothing standing in the way of computers for the public except for imagination, it seemed to me, and so I was trying to supply that. – Ted Nelson

I thought hypertext would lead to a millennial system of changes, and so it has, but much less influenced by my own work—my designs and ideas—than I’d hoped. – Ted Nelson

Other people’s hypertext just use jump links—that’s what the World Wide Web is, just jump links—whereas I consider it essential to see pages side by side, as in the Talmud, as in medieval manuscripts, as in any number of documents over the centuries. This is an essential part of the electronic document which we don’t have yet. – Ted Nelson