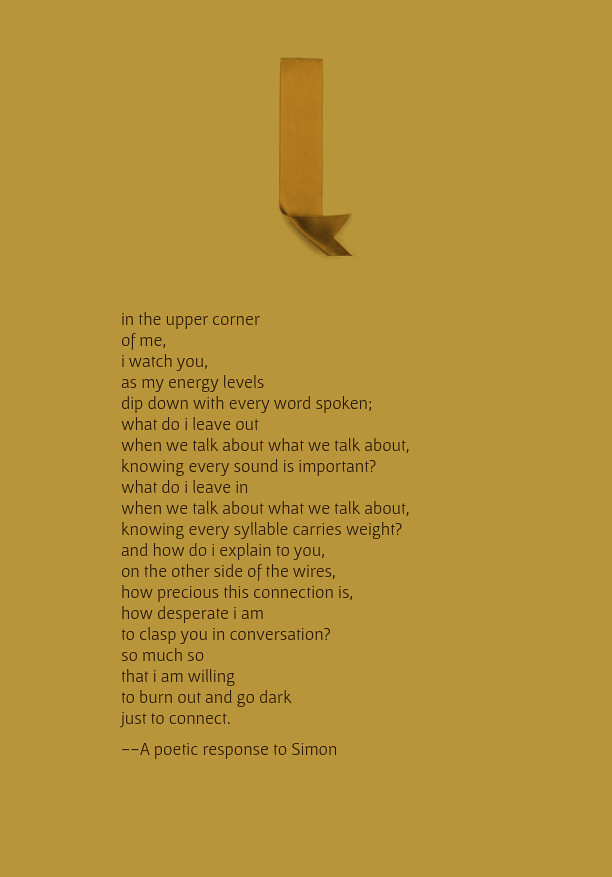 This morning, I followed a link from my friend, Simon, to his post yesterday about connections and disconnections. As always, Simon had me thinking as I was reading and then, afterwards. I wanted to leave a thought for him at his blog, a little flag in the ground to say: I read what you wrote, and it affected me, and now my brain is thinking, wondering.

A few seconds after posting a short comment, I realized that what I really wanted to do was write a poem, that the disparities of the world that Simon wrote about — of a former student struggling to keep power, literally, flowing in order to get a message out to the world — were part of a larger issue of access and technology in the world.

So, I wrote a poem, and shared it with him. Interestingly enough, the poem moved into the opposite direction: it was a poem of relationship of connections between two people. I was working to get at the narrow vision in order to make a point about the larger concept of how we decide where we will spend our energy connecting. I didn’t realize that until I was done writing the poem.

That got me thinking: why do I so often these days take what I have read in a blog post and turn my response into a poem?

I think it points to the power of poetry to get at something deeper. Prose comments on blogs are more of a “I was here” acknowledgement — and appreciated, by the way — but poetry is a “Your words affected me deeply and inspired this.”

I wish there were more poems sitting in my blog comment bin. No pressure if you are reading this (and I don’t need a deluge of poems, but dang, that would be cool). Still, it seems like the whole idea of reading and getting inspired is to take that inspiration, and move it into art of some sort, and then share it back. It creates this reverberation effect with the writer. It breaks down the walls between reader and writer.

I know many people are uncomfortable writing poems, never mind writing poems on the fly while reading blog posts, and then, to add to the pressure, posting it on a public space. It’s just one of those things that came to me as I was writing this post about Simon, creating a larger reverberation.

Maybe the ripple will allow you to float on a poem one of these days.