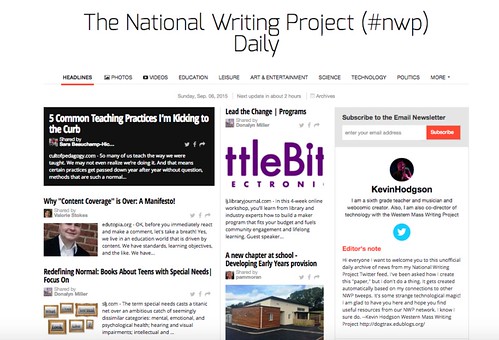 It’s been some time since I shared out my curated NWP Daily News via Paper.li, and I use that word “curate” very lightly here, as the robotic overlords who feed on algorithms are the ones who gather up news and sharing from a Twitter list of National Writing Project folks (670 peeps, listed as of this morning … wait .. make that 669 … see below), and somehow, it comes together in what I think is a moderately interesting daily collection of media, tidbits and more.

But I received a direct message on Twitter from a person in my NWP network about their inclusion into the “newspaper”  this week and the notice of their Twitter handle in an auto-tweet that comes out every day. They clearly were not happy with it, and they wondered how their Twitter account got so entwined with mine. They suggested that it was a misrepresentation of both of our Twitter accounts. I think they thought I have been intentionally scraping their content and representing it as my own.

Have I, inadvertently, doing that? Not in my mind.

I messaged back to them, politely, and then removed from them from my NWP List, so as to avoid putting them in the same situation in the future. The last thing I want to do is make anyone uncomfortable when the robots take over. To be honest, I’m not sure bringing other NWP folks to their Twitter account or bringing a small spotlight to something interesting that they shared out or wrote about is such a bad thing, but that’s not for me to decide.

Here I am, making a “newspaper” of Twitter folks who self-associate with the National Writing Project, and that message reminded me that I never do ask permission of anyone to become part of my NWP Twitter List. I just add them in. I also assume that the tweets from public accounts are public and that if you tweet something out into the open, then you are signaling your approval in having it viewed and collected  — or, in this case, curated under an unofficial NWP umbrella (“unofficial” because NWP bigwigs did not sanction me doing this, nor did I ask permission.)

I realize now that it is a bit of a can of worms, indicative of the Information Age.

On one hand, I hate the lack of agency I have in actually curating the darn Paper.li thing. I don’t think I can manually add content, just people’s streams of information (or at least, I can’t do that with the free version I use. I’m not sure about the paid version.) On the other hand, I am grateful that the algorithms do all that work on my behalf, so that I don’t have to spend the time each day. Because, you know, it wouldn’t get done, otherwise. I’m a realist.

It’s the typical Digital Age Cunundrum, right? How much agency do I give up to technology in order to achieve what I hope to achieve with the smallest amount of effort? And if I give up too much, am I really achieving what I wanted to achieve?

Instead, I just read my NWP News most mornings, and think, these NWP folks are doing some amazing things, and I enjoy reading about it. I get inspired by them. I learn from them. I guess you could say, I made this “newspaper” for me. But I am happy if others enjoy it, too. I even get a kick when someone who get mentioned shouts out some thanks to me, via Twitter, and all I can do is say, “You’re welcome. I had little to do with it. The robots are in charge!”

What I hadn’t realized, until this morning, is that not everyone would be so open about it and grateful to be part of my NWP experience. I guess that part of curation — the view of the skeptical curatee (is that a word? The one who is being curated?) — never crossed my mind until this morning. Maybe it should have.

Peace (on the page),