(This is a post for Slice of Life, hosted by Two Writing Teachers.) 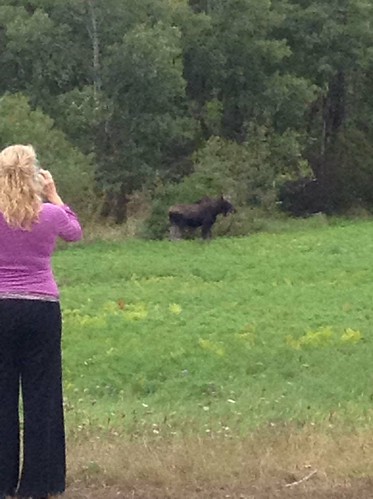 We live in the suburbia of Western Massachusetts, but it is not unusual to see wild animals wandering nearby. The influx of new homes on what used to be forest lands and open space has pushed animals into contact with humans on a regular basis. We have bears regularly traipsing through our backyard. Deer often wander into our neighbor’s large side yard. I won’t get into the mice that try to set up shop in our basement, except to say it is a season-long struggle to keep them out.

But a moose? Not so often. The last time I saw a moose in our Western Massachusetts neighborhood was many years ago, when I was taking a walk with my two older sons (who were much younger than they are now) and we came upon a mother and child moose in small dingle around the corner. We were startled. They were startled. They took off. We just gawked.

Did you know moose, with its lanky legs and odd-shaped torso, can run pretty fast? I know that now.

So, the other day, as I was driving my son to his clerk job at the family-owned grocery story, we were noticing a lot of cars on the side of the main road. Uh oh. I thought it was an accident. But it turns out, a moose was standing there, in the meadow off the road, watching the people watching it (they had phones out; he didn’t). It was a fairly large moose, just staring out. A few police cars were nearby, to protect the people as much the moose.

On the way home from dropping my son off, the moose was still there, but had moved to the further side of the field, and was now munching on the leaves of a tree. More people were stopped, and traffic crawled. I got home and told my middle son to get on his bike and drive down the street to see the moose.

“And take your camera!”

He did, and he did, and the picture above is the best that he could get. The moose had moved deeper into the field, and by the time I went out again about 30 minutes later, the moose was gone, as was all of the traffic. I went to get my youngest son from baseball practice, and he would not believe me that a moose was in our neighborhood.

Luckily, my other son backed me up. And he had photographic evidence.

Peace (along the moose tracks),
Kevin